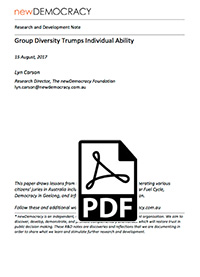 When assembling a randomly-selected group of people, for example in a citizens’ jury (see, Sample Size for mini-publics), what attributes are most important for the group members if they are to handle complex matters?

This question is rarely asked, because we assume that the answer is obvious. Instinctively we want the smartest people in the room, the “experts,” to solve problems and plan futures. They will know best. We also commonly assume that if the individual members are “smart,” the group will be “smart” as well. That’s what the Australian Prime Minister thought when he convened the Australian 2020 Summit in April 2008—bringing together 1,000 of the country’s ‘best and brightest’ (Department of Prime Minister and Cabinet, 2008). It seems to be a no-brainer, right?

A group of experts, whether or not they agree, share an attribute—they are holders and defenders of expert knowledge, and likely to hold predetermined positions. [See: Hearing from Experts]. These positions, especially when part of an organised group’s position, are surprisingly rigid and lead to a defence of those positions. This can be because of confirmation bias or it could be groupthink (Janis, 1982) (See, Critical Thinking). We are attracted to dwelling among ‘ghettos of like-minded people’ (Carson, 2006) who can reinforce our views, and this tendency is comprehensively canvassed in literature that examines negotiation or conflict resolution (see, Fisher & Ury, 1981). This tendency to defend a position is compounded if an expert has spent a lifetime establishing and defending his/her claims.

A comparison by two people who attended both the Australia 2020 Summit and the randomly-selected Australian Citizens’ Parliament (in 2009) yielded a surprising contrast about the relative advantages of assembled laypeople or experts (Hartz-Karp & Carson, 2013). The experts at the Summit engaged in bargaining or caucusing rather than a single-focused pursuit of a shared solution to a problem—which is what the everyday citizens did (Hartz-Karp & Carson, 2013).

Hence, newDemocracy’s close attention to deliberation — creating spaces where a group can “collectively explore possibilities, surface and test assumptions, and develop plans to address areas that they agreed would benefit all involved” (Holman, p. 2). Heterogeneity is an excellent starting point to achieve that.

newDemocracy has found that complex issues can be effectively addressed by “mini-publics” (randomly selected representative samples of the public (See, Mini-publics). Compared to groups of experts, mini-publics have three important advantages: they are more diverse in their ways of thinking; they are freer of pre-conceived ideas about the issue; and they don’t have to worry about maintaining their professional reputations with their peers.

With a diverse group, the type of group that is assembled using random selection, something different happens, both in individual shifts from I-to-we, but also the generation of ideas and the willingness to examine beliefs and attitudes without compromising their individual values. Here are some quotes from participants who deliberated in a few of newDemocracy’s mini-publics—they exemplify this willingness to learn and to grow in understanding:

There has been some critical reflection by scholars and a growing body of research focused on the advantages of mixing abilities, attitudes, backgrounds. The notion of collective intelligence or co-intelligence has also been explored (Gastil & Levine 2005, Atlee 2003). The creativity and productivity of diverse groups can out-strip homogenous groups (see Surowiecki, 2004), but especially if the diversity is epistemic—i.e. involving different ways of seeing and different levels of knowledge (See, Caluwaerts & Ugarriza 2012, Landemore 2012, Page 2007, Page & Hong 2004).

newDemocracy has seen this in action in the many mini-publics we have convened. We notice that the most assured can have their ideas undone by a naïve questioner or exposure to external experts who are present to answer questions (Marsh & Carson, 2013). We also notice that the less confident build their confidence if encouraged to contribute (See, Importance of Facilitation). Recall that newDemocracy is using critical thinking exercises to remove impediments to reason or rationality (See, Critical Thinking). The combination of levels of knowledge yields excellent results. Some quotes again from our mini-public participants:

Ideas generation can occur beyond a mini-public, without the necessity for deliberation, but the latter can convert a wild idea into something workable and even better. Thinking ‘outside the box’ seems to be easier for a group of non-experts who are not constrained by their training and their specialist knowledge. Status-seeking is inevitable in gatherings of experts but randomly-selected citizens are not worried about maintaining their professional reputations—they are too focused on problem solving and ideas generation.

Non-experts don’t know what’s impossible so are disinclined to edit their ideas prematurely based on pre-existing knowledge of impediments.

If we know a great deal about something the following happens: (1) we close our minds to alternative pathways, (2) we share our knowledge with people who support our opinion and this, in turn, limits our thinking, (3) our creativity is constricted because we think we know what’s possible, and dismiss anything which sounds unrealistic (Carson 2009).

What are the pros and cons of the alternative answers, compared to the usual answers and to each other?

Of course, on occasions, diversity is of limited value because a group of experts may be endeavouring to solve a very specific problem and their expertise is required to do so. Generally, newDemocracy is called for advice when the challenges involve value judgements or prioritisation; a microcosm of a population is the perfect group to deliberate on these matters.

newDemocracy continues to find ways to ensure diversity. We usually match a population’s demographic profile when using stratified random selection (See, Sample size). This means that we continue to investigate ways to attract hard-to-get groups such as young people or non-English-speaking people. Sometimes separate deliberations are appropriate to hear these missing voices.

Atlee, T. (2003) The Tao of Democracy: Using Co-Intelligence to Create a World that Works for All, Cranston, RI, The Writers’ Collective

Landemore, H. E. (2012). Why the many are smarter than the few and why it matters. Journal of Public Deliberation: 8 (1) Article 7. Retrieved from http://www.publicdeliberation.net/jpd/vol8/iss1/art7

Surowiecki, J. (2004). The wisdom of crowds: Why the many are smarter than the few and how collective wisdom shapes business, economics, society and nations. New York: Doubleday