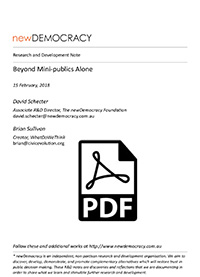 In recent years, Australia has seen many successful examples of incorporating mini-publics (See, Mini-publics) into public decision-making. Compared to the usual public engagement practices, these projects have been substantially more informed, more representative, more deliberative, and more influential. They have also provided outstanding opportunities for ordinary people to participate in a meaningful way.

But what about participation for the remainder of the public – the people who were not selected for the mini-public? Many practitioners and scholars have struggled with this question. More specifically,

The usual answers, and their disadvantages

Engaging in meaningful conversation with the general public is a tough challenge for mini-publics, as it is for politicians and government staff. The members of the general public who choose to participate are usually not representative of the population, and they can be poorly informed, passionate, and angry. Therefore, the dialogue may be unproductive and unnecessarily adversarial. In cases where large numbers of people are involved, the complexity of the conversation can be overwhelming. At best, the result is aggregation of individual opinions, instead of collaborative development of sound policy.

newDemocracy routinely seeks coverage of mini-public projects in local media and asks participants to seek conversations with local people whose views are different from theirs. newDemocracy has also opened conversations online so that the general public can comment. These measures are helpful, but much more can be done.

Compared to self-selected groups, randomly selected mini-publics have several important advantages (See, Mini-publics). They are more representative, more deliberative, and more corruption-resistant (See, Deliberation). However, there are also some important advantages to deliberation that is open to all interested members of the public — broader participation, greater variety of ideas, and increased public support for the process and the decisions. Is there a way to incorporate the best features of both?

One promising strategy would be to use mini-publics to perform functions for which they are well suited, and to assign complementary functions to self-selected members of the general public, functions that they are well suited for. newDemocracy intends to trial the use of self-selected “proposal teams” when a mini-public is convened. The proposal teams would develop and submit ideas and solutions. The mini-public would review the submissions and decide (for an application of the same principle to lawmaking, see the paper on multi-body sortition by Bouricius, 2013).

The organisers would invite interested members of the public to form or join “proposal teams” that are tasked with developing proposals for a mini-public “policy jury” to deliberate and decide on. In some cases, these teams might submit something other than proposals – for example, well-documented statements of values and information that they think are important to convey to the policy jury.

In newDemocracy’s experience, it can be challenging for a mini-public to seriously study even a small number of submissions. Proposal teams could easily generate so many proposals that they would overwhelm the policy jury. In order to handle this problem, newDemocracy is considering the use of a separate mini-public — a “review panel” — to review the submissions, give feedback to the proposal teams, and create a summary report for the policy jury, similar to that which Bouricius (2013) proposed for law-making. The 2016 Irish Citizens’ Assembly experienced an impossible challenge when 13,000 submissions were received, many of them form letters (See, Irish Prime Minister’s Office). In a case like this, nDF’s strategy would be to identify duplicates and list the duplicated submission once, noting the number of times that it was proposed.

After the review panel has prepared its summary report from the proposals, the policy jury would then deliberate and make the final recommendation or decision. This is the typical role that mini-publics play in newDemocracy’s projects. However, with the help of the proposal teams and the review panel, the jury would benefit from a set of proposals that was more diverse, and better organised, than is usually the case. newDemocracy has called for submissions in previous projects, but this model would go a big step further towards meaningful interaction between the mini-public and the general public.

This model could retain the benefits of the usual mini-public deliberation processes and add some important new benefits. From the first announcement of the project, the public would know that there were two forms of meaningful public involvement (randomly selected and self-selected). Everyone would have an equal chance of being selected for the mini-publics, and everyone not selected could participate in proposal teams. The policy jury and review panel, responsible for reviewing proposals, deliberating, and making the final recommendation or decision, would have the advantages of being representative, deliberative, and corruption-resistant. The proposal teams, responsible for generating ideas for the mini-publics to consider, would foster broader participation, a more diverse range of ideas, and increased public support for the process and outcomes of the deliberation.

For people who participate in public deliberations, the “rules of engagement” would be different. They would have the obligation to produce proposals that would be reviewed by one mini-public and then decided on by another; and they would have the opportunity to get a fuller, fairer hearing than they usually get. For people who don’t participate now, but who would want to participate under the right conditions, there would be the possibility of involving many more people, in a much more useful and meaningful way, than is possible now. For those who are inclined not to participate under any conditions, they would at least know that they have the chance to participate, in a better way than is available now. And they would know that this opportunity was available to anyone in the jurisdiction. This option is likely to increase their trust in the process – and increase the likelihood that at some point, about some issue, they too might decide to participate.

Most people won’t take the time to do this. You won’t get many submissions. It won’t be worth the effort, and the expense.

Typically, a mini-public is convened when there is a controversial issue that the public cares about. We believe that some members of the public would greatly appreciate the opportunity to work with others who share their concerns, to produce an actionable proposal that would get a serious hearing from a mini-public. Even if the call for proposal teams resulted in only a few submissions, it could still be very worthwhile, if the submissions broadened the thinking of the mini-public.

We also think that if proposal teams became part of public decision-making on a regular basis, more people would choose to join teams, and many of those who did not would still appreciate having the opportunity to do this if they wanted to.

The people who are willing and able to organise themselves into teams and develop proposals will not be representative of the public. Special interests with funding and staff will be over-represented, so will retired people, and the “usual suspects” who show up at public meetings. You won’t get much participation from working people, from single mothers, or from people who aren’t involved with an organised group.

The combination of good outreach and the right incentives can do a lot to encourage participation by people who are not the “usual suspects.” Nevertheless, it is very likely that the people who choose to join proposal teams will not be fully representative of the whole public. That is why we propose to have mini-publics, which are more representative, play the role of deliberating and deciding about the submissions. This process is intended to create a space for good interaction between the “usual suspects,” the new participants, and the randomly selected policy jury. Everyone has the right to help develop a proposal, and the power of recommendation is given to the most representative group – the policy jury.

Why should the views of a tiny randomly-selected group have more weight than the much greater number who might submit proposals?

Compared to the people who are willing and able to take the time to develop proposals, a mini-public will be more representative of the whole public, better informed about the whole spectrum of views on the issue, less vulnerable to the influence of special interests, and in a better situation to have an open-minded dialogue.

The Australian Citizens’ Parliament in 2009 combined a 150-person mini-public with submissions by multiple online proposal teams of at least four members each. In the end eleven proposals were completed, prioritised, submitted to and then reviewed by the Citizens’ Parliament and were included in the final report. The teams provided proposals that formed the opening agenda of the ACP and those proposals very significantly flowed through to the final recommendations. Without the proposal teams, the ACP may have mostly spent their time commenting on the agenda that was presented to them by the organisers (Sullivan & Hartz-Karp, 2013).

Policy juries and review panels have the same requirements of success as other mini-publics, including a good representative sample of the constituency (See, Sample Size), training in critical thinking, (See, Critical Thinking), information about the subject matter (See, Hearing from Experts) and skilled facilitation, by a trusted, qualified outside provider who has experience with deliberative forums (See, Importance of Facilitation).

For proposal teams to be successful, requirements include clear criteria for proposals, good outreach, effective communication about what the teams need to do and what they can expect, access to subject matter experts, and clear and timely feedback on proposals from the review panel and the policy jury.

The final requirement for success is a software platform that makes it easy to host and curate multiple conversations with varying groups of stakeholders. It should provide a continuum of opportunities to participate in both digital and real-world channels that appeal to the varying levels of interest and commitment of the stakeholders. It must minimise the barriers to participation, and it should give participants the ability to review the process if they want to, and to see the history of how proposals were developed. This is particularly important for the proposal teams, but it could also be important for the review panel in cases where there are many proposals submitted. One software application that aims to provide these features in one user-friendly package is WhatDoWeThink (developed by one of the authors, Brian Sullivan).