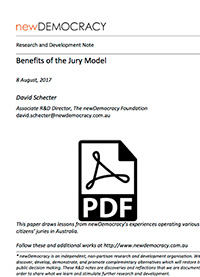 Why use the jury model of random selection and deliberation? Why would public officials want to incorporate the jury model into public decision making? What are the benefits of the jury model, compared to the usual forms of public engagement?

The usual alternatives and their limitations

Public officials (elected representatives and bureaucrats) use a number of methods to consult with the public, including focus groups, ‘town hall’ meetings, and opinion polls. All of these are limited in terms of the representativeness and diversity of the participants, and the quality of the conversation that is possible to have with them.

The jury model and its benefits

The jury model of community engagement is based on ‘citizens’ juries’—first designed by Ned Crosby in the US and separately by Peter Dienel in Germany in the 1970s in a different version called ‘planning cells’. These are similar to criminal juries in several ways—participants are randomly selected, they become deeply informed, they deliberate together, and they come to a group conclusion. Citizens’ juries are different from criminal juries because they focus on policy issues, they are more representative of the population than criminal juries, their deliberations are professionally facilitated, and they usually make recommendations rather than binding decisions.

Participation beyond ‘the usual suspects’

A fundamental question about any form of public participation is “who participates?” The usual forms of participation tend to attract a very limited sub-set of the population – ‘the usual suspects’. They are sometimes well informed, and often passionate, but as a group they are far from a representative sample of the public. In the jury model, the participants are randomly selected using statistical sampling, so that they are both much more diverse and much more representative of the whole population.

In the jury model, participants are trained in critical thinking, and informed about the issue at hand. They talk with a range of experts representing different points of view, they are able to choose the experts they wish to hear from, and they engage in professionally facilitated deliberation together. The result is a better policy conversation – better informed, less adversarial, more respectful, and more thoughtful.

When you put 40 people in a room, and expose them with evidence, and provide them with an opportunity to have time to reflect and ponder, you get something which is so rare, and that is common sense…It’s a natural mechanism to ensure that what you get ultimately in the final report, because it needs to be signed by the majority of those 40-odd people, you get actually the voice of common sense (CEO, Infrasturucture Victoria). (Riedy & Kent, 2017)

Perhaps the more important benefit of the jury model is increased public trust in the decision, the decision making process, and – over time – in government in general.

The issue was investigated and discussed so thoroughly that the elected members felt that the recommendation had real validity, and had all of the community been able to be involved in the process, then the recommendation would have been from the whole community…we never have been able to do that sort of thing before, on a complicated issue because they’re not just yes/no issues (Former Mayor, Noosa Shire Council, in Riedy & Kent, 2017)

Making it easier to decide about the hard issues

Citizens’ juries deliver sensible recommendations, and the public tends to trust them, because they include ‘people like me’. Participants are informed, and they are clearly not being manipulated by politicians or special interests. These benefits enable the jury model to make a critical difference in helping leaders come to decisions on tough, controversial issues – the ones where ‘no matter what you choose, you lose’.

It has been in a stalemate for so long that had we not run a jury on it, it may not have got to where it got to, which is, “Okay, now I’m going to do something” (Community Engagement Manager, Noosa Shire Council). (Riedy & Kent, 2017)

The newDemocracy Foundation continues to develop its work with the jury model. Our research and development in this area includes aspects of good process for citizens’ juries, such as jury selection (See, Sample Size), training jury members in critical thinking (See, Critical Thinking), and how to help jury members work effectively with experts (See, Choosing Experts & Hearing from Experts). We are researching and developing uses of the jury model for specific purposes, such as budgeting (See, Budgeting by Jury), and ways to complement the jury model with open participation by self-selected proposal teams.

Dienel, P. and Renn, O. (1995). Planning Cells: a Gate to “Fractal” Mediation. In Fairness and Competence in Citizen Participation, Springer