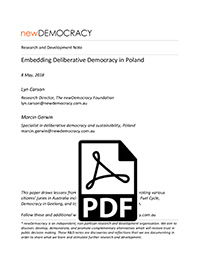 There have been many successful examples worldwide of mini-public deliberation on tough policy issues, but few examples of incorporating it as an ongoing part of “the way we do democracy.” One of the rare exceptions can be found in the Polish city of Gdansk. What has been done there, and what can be learned from it?

Josiah Ober (2017) argues that we should go back to basic democracy, rather than liberalism (or the political philosophies that are associated with it) when thinking about political futures. Democracy, in its original expression, guards against tyranny or authoritarian populism because of its preoccupation with cooperation and social cohesion. Of course, this only works for those who don’t wish to live in an autocratic state.

However, with that in mind, one can note what French President Emmanuel Macron describes as Europe’s “increasing fascination with illiberalism” (Erlanger, 2018, p.17) and wonder if any democratic practices prevail. Perhaps it’s the ultimate appeal of democracy that has led to some unexpected democratic seeds being sown in that barren, illiberal ground.

This research note is concerned with local government (LG) in Poland. Differences should be noted about LG’s expression there and how it is experienced in Australia, the latter having a less wide-ranging role than their Polish counterparts. In Poland, municipalities called “gmina” are responsible for taking care of the basic needs of citizens. The scope of those needs is greater there than in Australia.

In Poland, these responsibilities would include local roads, healthcare, education, culture, environment, water supply and more. Police and fire brigades are under control of the state; however, they can be supported by the municipality. Around 40 percent of income tax from the citizens goes to the local budget, along with a small percentage of income tax from companies. The maximum rates of local taxes are set through national law, but municipalities have the right to set their own rates within this given limit. This is somewhat reminiscent of Switzerland’s local decision making though there are clear differences as well.

Because of Poland’s national and local system of governance, there are some possibilities for municipalities to create local laws, and one of them is the right to determine local rules for organising public engagement. It is voted upon by the council of the municipality. Until now, those local rules have not encompassed deliberative democracy.

Poland is surprisingly familiar with citizen-led decision making. There is a culture of participatory budgeting because over 200 have been convened there, including in Gdańsk (since 2014). In the first city, Sopot, it was inspired by a local group of citizens who campaigned for the implementation of participatory budgeting. After that it spread to other cities. These are “now part of Polish political reality” (Kebłowski & van Criekingenb, 2014, p. 369). There have also been other tentative, deliberative experiences in Poland, such as the deliberative poll in the city of Poznań but results were not binding. Mini-publics (See, Mini-publics), as convened by newDemocracy were unused there.

However, in relation to the topic of this paper, i.e. specific experiences in Gdańsk, international influences can be confirmed. One of the authors of this paper was the driving force behind the initiatives which followed. Marcin Gerwin notes that reports and other materials published on the newDemocracy website were the main source of inspiration for designing the first citizens’ assembly there. Similarly, experiences from Australia were presented during a seminar in Warsaw in 2016 on deliberative methods of consultations (See, here).

It is worthy of note that one of the most difficult deliberative ideals to have enacted is a guarantee of influence by the decision maker. There are some stand-outs examples appearing worldwide with the Irish Constitutional Convention a recent success (See, Irish R&D Note). newDemocracy insists upon influence in all its projects but it is very unusual in other places. Impressively, this insistence was observed by Gdańsk organisers and a guarantee of influence was adopted there.

There have been three citizens’ assemblies in Gdańsk and another as we write, in Lublin. They have followed a similar procedure and bear many similarities with newDemocracy’s method: randomly selected citizens, engaging in days of deliberation (See, Deliberation), hearing from experts (See, Hearing from Experts) and offering recommendation for which they have reached agreement (Details can be found here).

From a legal perspective, citizens’ assemblies in Gdańsk are organised by the mayor. In practice, however, they are organised by a team of three or more independent coordinators in cooperation with the municipality. The issues they have deliberated upon include air pollution, flood preparedness, gender and sexual equality. Random selection is used to ensure a demographic match to the wider population based on age, gender, district, education level.

In summary, the Polish organisers (led by one of the authors of this paper) have created the following standards to ensure integrity of the citizens’ assemblies for use in Poland:

Some differences with the newDemocracy model

newDemocracy always insists on small group activity because of the power of small group discussion. The Polish organisers have a clever way of organising this which newDemocracy is likely to recommend. Discussions in small groups in Poland are carried out in groups of four people. Tables are not used. There are numbers attached to the backs of chairs that form “nests” of four chairs. Members of the citizens’ assembly are given sheets of paper with numbers of nests for discussions in small groups. There is a special algorithm prepared to ensure maximum diversity in groups, so that people can listen to many different voices and opinions. The Australian experience has been far less formal. Both formal and less-formal methods are designed to enable members of the citizens’ assembly to get to know each other as a whole group. This way of working in small groups was inspired by the World Café method (See, World Café).

Gdańsk, with its population of more than 460,000, has taken public deliberations to a new level of influence for its citizens. The local government has introduced a law, entitled Rules and Methods for Organising Public Consultations. This law enables citizens to initiate a citizens’ panel as described above. If 1,000 signatures are collected, the Mayor must consider a citizens’ panel. With 5,000 signatures the Mayor is obliged to convene a citizens’ panel. There is also an agreement that, afterwards, it will be shown how recommendations have been enacted. This is to be published in an annual report. This instigation of a panel is not confined to citizens alone, of course. Both the Mayor or the city council can also initiate one.

This empowerment of citizens is a significant improvement on current practices in other countries, including Australia. It also challenges academic accusations against a citizens’ juries and panels, that they are of “limited” value, “a democratic veneer” that simply “reinforces authority” (Walker et al 2015). Importantly, an institutionalised, uncontested arrangement such as this is likely to earn greater trust through a pre-agreed authority. It creates clear guidelines regarding citizen input to policy making.

The activities in Gdańsk are a fine example of cross-country collaboration. newDemocracy is experiencing more and more of this—for example, with a current project in Madrid. Similarly, the international network known as Democracy R&D, a newDemocracy initiative, is made up of organisations from 13 countries and collaborates on projects and shares organisational learning for the benefit of all.

One of the important lessons from Gdańsk is this: those who are agitating for more democratic methods need only request that a citizens’ jury has a guarantee of influence. As the Polish co-author of this paper notes—just ask! The response may surprise.

The Gdańsk model with its bottom-up trigger mechanism, its citizen-initiated democratic innovations, is a perfect partner for top-down convening of democratic exercises. The combination can be powerful and may forestall further drifts toward authoritarian populism.

It should be noted that although the Gdańsk law is currently in place (i.e. the automatic trigger mechanisms at 1,000 and 5,000 votes), it has not yet been activated. We don’t know how effective it will be, but we watch with interest both in Gdańsk and from afar. We also don’t know how well a citizens’ assembly could be used in Poland to address some of the most contentious and vexing issues there, such as population migration. We could also speculate that the ability to make local laws enabled the obligatory nature of citizens’ assemblies to be established. Could this happen in Australia if it was merely a local council’s policy? Again, we do not know.

However, we do know that Gdańsk has taken a giant step forward in terms of meaningful citizen engagement at the local level.

Pogany, Stephen I. (2018) “Why Hungary and Poland are turning away from constitutional democracy”, The Conversation, (Accessed 10 April 2018: https://theconversation.com/europes-illiberal-states-why-hungary-and-poland-are-turning-away-from-constitutional-democracy-89622)