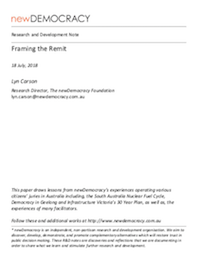 How to develop a question for public deliberation that satisfies the needs of both participants and organisers, without leading participants toward a pre-determined answer or introducing unnecessary confusion?

What is the usual answer?

Scholars look toward Ancient Greece as the cradle of democracy and lament the passing of its democratic practices. Much has been written about its attributes and how they might be applied in a modern context (Carson & Martin, 1999; Manin, 1997). What is overlooked are other examples that exist today that can teach us a great deal about how to ‘do’ democracy.

How was this Research Note developed?

This research note is the product of a discussion with the facilitators who were involved in the projects listed at the end of this note. The facilitators have a good understanding of the degree of difficulty for both themselves and the participants. Each remit was rated by facilitators and their comments compiled and analysed.

Before beginning… Has the issue been clearly defined?

Before considering the right question for a mini-public to deliberate upon, a decision-making body would have to be very clear that it has identified the best issue or dilemma. The Kettering Foundation (2015) sees the framing of public issues this way—its list is a neat way of considering the appropriateness or otherwise before even beginning the process of public deliberation. This list provides a helpful starting point.

An issue IS appropriate for public deliberation IF:

An issue is NOT appropriate for public deliberation IF it:

It’s important to note that an issue is likely to be a challenge or a dilemma that a decision-making body is facing. The dilemmas could be explicit or implicit. The issue could be exposing a single, specific dilemma (e.g. limited funds so infrastructure needs to be prioritised or addressing growing obesity in the community) or multiple dilemmas (e.g. a wicked problem like climate change and how to address the unfolding crisis caused by climate extremes). All are likely to lead to a set of recommendations by a mini-public.

What are the problems that can arise?

Having decided on an appropriate issue, we can then proceed to formulate or frame the best question to ask. When framing this inquiry, question or remit, the chosen words need to be sufficiently broad in order to be generative, but not so broad that participants are side-tracked into irrelevant discussions. If it is too narrow, it will confine the group’s thinking and the group will, understandably, demand explanations—why are we confined to this or that?

This remit for Noosa Council is an example of a remit which caused unnecessary confusion:

The citizen jurors became caught up in debating how well the river was managed now, which was fair enough to help them decide what, if anything, needed better management. However, the question that Council really wanted answered was: should Council take on the management of the river? This underlying question is not evident from the remit.

Note also in the above remit the word “should”. This was variously described as a word that should never appear in a remit until examples of excellent remits made it obvious that there can be no hard and fast rule.  Given that a mini-public is charged with making recommendations about what decision makers should do, it makes sense. This need not preclude discussion about what could happen or what might be. Facilitators think that if deliberators start thinking ‘should’ too early they may prematurely exclude creative possibilities and options.

Clearly, it is a word that should be used with caution. By contrast, the word “could” is quite open and replete with possibility. This word can be found in the South Australia nuclear waste project described below.

One remit which has been described as both excellent and poor by those involved was for the South Australian Government:

Under what circumstances, if any, could South Australia pursue the opportunity to store & dispose of nuclear waste from other countries?

It was thought to be too yes/no, an outcome that is best avoided because a remit needs to be as open as possible. Also, it was thought that the trade-off is not expressed in the question though that proved to be contentious in the discussion among organisers and facilitators. The counter-argument is that the question allows for a ‘no’ response which proved to be very important for the participants, but also allowed for the possibility if circumstances warranted it. This remit covered an issue where there were extremely strong perspectives, which requires lots of hard work for facilitators (See, South Australia Nuclear). It’s unclear if a simpler or different remit would have reduced that load.

The above remit also led to considerable debate among participants. This is not necessarily a bad thing. People often question or argue against a particular remit. They may consider that they know the answer already or they may crave more nuance. Thankfully, this can be an excellent way of beginning the deliberation.

Returning to the importance of explicating trade-offs, here’s another example, the 10-year participatory budget for the City of Melbourne, the remit being:

Melbourne is growing & changing & the next decade will bring increased demand on our services, as well as new challenges & opportunities.
How can Melbourne remain one of the most liveable cities in the world while maintaining a strong financial position into the future?

Though this was a successful project, participants initially struggled to understand the dilemma. The remit was thought to be too long and didn’t get to the real problem and the trade-offs involved: if we want X then what must be give up? newDemocracy advised a different remit:  How can we live within our means? Perhaps this means that a government’s role in crafting a remit should be curbed when problems are anticipated. The final, poor remit was salvageable because of the ample project timeline. A good remit saves time; a poor remit can be saved by allowing for extra sessions.

When does a remit work well?

As mentioned above, embedded in the question should be the constraints or trade-offs that have been encountered. Parameters are also carefully and fully described. Confusion and ambiguity must be avoided, and language kept simple.  Here’s an example of a remit (for Yarra Valley Water) that worked extremely well and included the trade-off, expressed as a need to find balance between service and price:

We need to find a balance between price & service which is fair for everyone.
How should we do this?

newDemocracy often talks about a good remit as passing the “barista test”—anyone sharing a coffee can hear it and understand exactly what is required and what the focus is. Another option would be to convene a focus group to assess its workability. It’s also entirely possible to convene a mini-public to do the early work on defining or finalising the remit.

Perhaps one of the most successful remits was this one:

How could Australia’s political system be strengthened to serve us better?

This was used for the Australian Citizens’ Parliament (Carson et al, 2013), and was created by a steering committee after considerable, sometimes-heated discussion. The heat arose because some thought it was erring too much on the side of an opinion that the system was broken. However, the remit was tested at a large World Café with hundreds of Sydney-siders and a number of smaller World Cafes throughout Australia, giving the organisers complete confidence that the remit was sufficiently clear and open-ended.

Another remit which rated well for both scope and clarity was one for Darebin Council:

How should we best spend $2m to improve our community through the use of infrastructure spending?

The remit is brief and extremely specific. It contains the goal “improve our community”, the exact amount of money allocated “$2m”, and the boundaries “infrastructure spending”. Here is another which is similarly-brief and specific—convened for VicHealth:

How can we make it easier to eat better?

Although it was designed to tackle obesity, that is not its starting point. However, the remit kept the deliberation tightly to a single issue and worked extremely well.

The remit for Greater Geelong also worked well.  The background is explained in four words. The question is precise and concise.

Our council was dismissed. How do we want to be democratically represented by a future council?

Note the use of want is this remit. This can provide a good alternative to could or should.

What else is important to be aware of?

Remits become very important for a deliberation. This is not a consultation exercise where communities are asked for input or feedback. They are addressing real challenges and have to provide viable recommendations.

When phrasing a question as a question, consider what must accompany that question if the question is too broad. This could be a single statement which precedes or follows the question. Here’s an example of that, in relation to housing choices for the ACT Government:

Canberra is changing – and there are many different ways our housing needs can be met.  What do we need to do?

… highlights the finite capacity of citizens for political thinking and their tendency to engage in self-serving cognitive processes… (Leeper & Slothuus, forthcoming 2018).

Facilitators who are skilled in deliberative techniques know that citizens may struggle at first, but they always find a way through any difficulties, and they will consider public interest, not simply self-interest. Often the biggest challenge will be for the facilitator who has to keep the group on track; a skilled facilitator knows how to do this, but a clear remit will make that task easier.

Co-design is another way to ensure a clear, precise remit. This would mean working with the same group or another to define the agenda and the question to be asked. It is also possible to refine the remit at the first meeting in the company of the decision maker. This would certainly build trust in the process.

Of course, one of the impediments to a viable remit may well be obstruction by the decision maker who does not want to admit that a problem exists.

Some tentative Do’s and Don’ts

newDemocracy considers that the formulation of a workable remit is misunderstood and undervalued. This research note is an attempt to stimulate discussion about the matter.

Finally, remember, this is not a science. There are not hard and fast rules. There are not necessarily instructions that should be followed because of the highly context-dependent nature of framing a remit. newDemocracy welcomes comments on this note, particularly from anyone who may have experienced a mini-public.