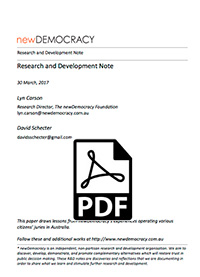 How can we enhance the ability of randomly-selected citizens in mini-publics (such as citizens’ juries) to understand and evaluate expert evidence?

It is sometimes assumed that we have an innate capacity to think critically. Some people are born with it, some are not. A common assumption by decision makers is that a randomly-selected group will be unable to understand or evaluate expert evidence. A further assumption is that it takes a combination of natural ability and years of experience. Citizens are assumed not to have this skill, whereas experts and politicians do.

It’s true that citizens only rarely encounter the practice of critical thinking or even the term critical thinking, unless they have studied in an institute of higher learning. Even then it is likely designed to enhance the critical thinking capacities of individuals, doing solitary thinking, learning to think for themselves, whereas in a mini-public, participants are part of a collective consideration of expert knowledge.

Decisions are being made that lack citizen appraisal and approval. Consequently, the gap continues to widen between those who govern and those who are governed. Decision makers not only miss out on the views and judgement of their constituents but also miss original or creative solutions to intractable policy problems. Of course, the training and experience of experts and politicians is no guarantee that they have acquired the necessary thinking skills. Experts and politicians need to learn, too, but this R&D Note is focused on citizens.

Citizens in mini-publics must make a transition from “how to think for themselves” to “how to think well with others.” This is extending the practice of individual “critical thinking” to a “collaborative inquiry”, or “critical engagement”. It is useful to think of a mini-public as having a “collective mind” that is more than the sum of the minds of its individual members. Therefore, the training or practice of critical thinking must be embedded in mini-publics.

Critical thinking among participants is a relatively under-explored area yet crucial to achieve genuine deliberation. Piggott et al (unpublished) have argued that critical thinking is best done in the company of others and use the term ‘critical engagement’ which is relevant to the type of collaborative decision making that occurs in deliberative forums.

Some attention has been paid by researchers to the existence and effect of bias. However, it could be argued that neutrality and objectivity are difficult to achieve and that an exposure of bias may be a more realistic path to take when deliberating (see Carson 2013). For that reason, newDemocracy is currently experimenting with two strategies: introducing cognitive or personal biases, and having participants work with various critical thinking approaches.

These exercises were first trialled by MosaicLab in Hobsons Bay, Victoria in 2016, and were designed by Lyn Carson from newDemocracy. These were modified and used for the Nuclear Citizens Jury in South Australia later in 2016 and the Geelong Citizens’ Jury also in 2016/7.

Here’s how it worked. Participants in both Hobsons Bay and SA were allocated a card displaying a single approach, watched a short film on CT, worked in small groups with people who had the same approach, and together developed potential, specific questions to ask experts. Then, back in the plenary, participants shared those questions – and many questions were thoughtful and probing.At Hobsons Bay, 30 citizens experienced the critical thinking exercise; in SA over 300 citizens repeated that experience. The latter employed a slightly-abbreviated version of the original seven approaches which are considered essential for the practice of critical thinking: clarity, accuracy, precision, relevance, depth, breadth, logic. In SA ‘precision’ was deleted because of the overlap with ‘accuracy’.

Participants then participated in a ‘speed dialogue’ session with multiple experts. In SA, the expert speakers were drawn from a Nuclear Stakeholder Reference Group or its nominees. Speakers were instructed to speak for only a few minutes and then allow the participants to fire questions.

Participants were in small groups of five to six and in most cases a range of approaches were represented; experts rotated through the groups and were interrogated by all participants. Participants were told that the combination of all six approaches needed to be used and satisfied in order to ensure that critical thinking occurs.

We learnt that it is useful to have a ‘pause group’ – where there is no expert – so that participants could discuss what they had heard so far and evaluate how effective their questioning had been.

To supplement these sessions in the SA Jury, there was a wall that became populated with facts for checking. In a later session, there was an opportunity to alert facilitators to gaps in information or knowledge and how the juror considered this gap could best be addressed (e.g. via a witness or a written response).

After the ‘speed dialogue’ session, expert speakers and participants commented favourably of the quality of questioning.

Back in the plenary, participants again worked with people who were using the same card/approach to debrief about the questions that worked well and the facts that still needed to be checked. Later, they shared examples of effective questions, i.e. those that extracted clear and accurate information, or exposed flaws in reasoning. It was seen as good preparation for the next weekend when more experts, of participants’ own choosing, would appear as witnesses.

If we know a great deal about something the following happens: (1) we close our minds to alternative pathways, (2) we share our knowledge with people who support our opinion and this, in turn, limits our thinking, (3) our creativity is constricted because we think we know what’s possible, and dismiss anything which sounds unrealistic (Carson 2009).

Participants rarely claim to know a great deal and that means their minds are available for critical thinking. The combination of explanation and instruction about the use of critical thinking, along with opportunities to identify questionable facts, or missing information, provided excellent preparation for a selection of further speakers.

This exercise has only been trialled among diverse citizens in CJs so far, not in sector deliberations. newDemocracy wants to keep trialling different exercises to see what works best for participants. Additionally, more research with cognitive biases may strengthen the exercises outlined above.

newDemocracy is currently working with personal biases as the first step in a public deliberation, during the first briefing session and on day one, then using the critical thinking approaches on day two. In other words, promoting awareness of participants’ own biases before demonstrating how to interrogate expert knowledge. The seven biases currently being used are: anchoring/recency bias, bandwagon effect, blind-spot bias, confirmation bias, information bias and stereotyping.

Where can I find more information?

The activity was designed to foreground the importance of interrogating expert knowledge and to enhance the critical thinking capacities of everyday citizens. For that reason, MosaicLab and newDemocracy wish to make this material available for all to use.

MosaicLab has an Activity Kit which can be accessed here.

A leaflet was produced for the SA Nuclear Jury because of the presence of Indigenous expert witnesses: Being Culturally Aware – Using Critical Thinking. The jury was overseen by Democracy Co. The leaflet was developed by Joel Levin, Aha! Consulting and was revised by a number of Indigenous community members and elders.