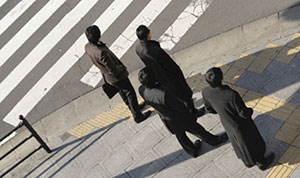 Drawn from the work of Prof. Ethan Leib, University of California

A basic tenet of western democracies is for a Constitution which provides for three basic branches of government: executive, judicial, and legislative. But with parliaments seemingly increasingly unrepresentative of the people they govern, it is suggested that a fourth branch should be added – the popular branch, comprised of a randomly drawn group of citizens. The passage of a binding decision would require a supermajority of two thirds of the Popular House as indicative of broad-based popular consent.

This is not a consultative group drawn to discuss a single issue: it is proposed The Popular Branch would be institutionalised and permanent with a clear separation of powers. This would include a potential power for judges to send a question to the assembly to settle a matter where the court would otherwise be making new law.

In this model, service would be compulsory (like jury duty), which would avoid the biases of ‘self selectivity’ where a random group is skewed to only those with a specific interest opting in. (This is also known as the ‘voluntary response problem’.)

The commission responsible for administration of the popular branch would take the form of a select committee drawn from the legislature with representatives from all parties and independents.

The group itself is assembled using random stratified sampling: inserting mandatory representations for any criteria deemed appropriate by the citizenry (e.g.: age, gender). Functionally, the large group is broken down into discussion segments of 10-15 people which are constantly reshuffled to avoid the creation of ‘bloc’ votes and to ensure a deliberative method with the sharing of new opinions and perspectives.

Measures to ensure citizen competence can be achieved by including an educational process on eash issue, much as today’s representatives receive briefing papers from departments, so too would representatives in this house. Submissions would be able to be made by anyone (the mechanism of who can make a submission is itself the subject of numerous alternative options) into a deliberative materials handbook for a given issue. All affected stakeholders get the chance to present a view to the deliberations.

The creator of this concept suggests that it would, in time, take the place of the referendum as a means of ‘going back to the people’, as referenda have been academically adjudged a poor tool for decision making given that they seek often complex decisions with little prior information and elicit only basic Yes or No feedback from the population.

a. The system ‘unbundles’ representatives who come with a bundle of policies, as representatives in the popular branch can choose to pass only the legislation that they support, rather than having to approve a party platform as a whole as current voters are deemed to have done in providing a mandate to a given party.

b. Currently, any divided government (where the party in power does not also control the house of review) tends to be limited in effectiveness. The creation of a non-partisan path for approval of legislation will serve to remove this bottleneck.

c. Voter initiatives (eg: Californian style ballot initiatives and referendum) tend to be susceptible to ignorance or self interest (rational or not), influenced by mass media campaigns aimed to skew and misinform. A group of citizens paid to explore widely drawn background papers and with no allegiance to party will have a stronger capacity to make an informed and representative decision. As such it is explicitly designed to beat the information vacuum most voters face by encouraging deliberation in small groups.

d. Inequality of power to secure office is redressed. Many systems are argued as having a ‘legitimacy deficit’ – here this is eliminated. Citizens will tend to have greater confidence in decisions made by a group beyond the reach of donations, lobbyists and the needs of re-election.

e. The structural nature of a fourth branch makes for consultation that cannot be ignored or set aside if it is politically unpalatable to the government of the day.

f. It adheres to a core democratic ideal that makes people closer to being the authors of their own laws.

Compulsory service is potentially unreasonable, depending on the re-imbursement offered, term of service required, and legislated protection for a return to employment. This same argument could also be made in relation to criminal juries.

Should a system be stratified to ensure a fixed mix by ethnicity, class or wealth, age, occupation or other factor? This question in the first instance should be turned over to a deliberative group of citizens to explore – the model itself does not prescribe a single fixed solution (as there will be cultural variations). The reader is asked to consider that representativeness stems not from who is included, but from how they are included – which will face far fewer barriers than today.

“Doesn’t this give an undemocratic power to a moderator when the groups are broken down into discussion segments?”

The author (Prof. Leib) proposed that the use of judges and retired judges as ‘experts’ in impartiality and process would counter any perceived issue here. The newdemocracy Foundation would suggest that professional moderators and trained citizens would also be highly appropriate for this role.

The Popular Branch functions when it is ongoing, independent, and expected to continue indefinitely.

That citizens’ subscribe to the Jeffersonian notion that “Only power arrests power” – to create a genuine check on the elected officials the role of citizens cannot be merely advisory.

The original New England town meeting is considered by many as a foundation of the ideals of deliberative theory. Through the 20th century, greater public involvement in policy has taken numerous forms – one notable example being the 1930’s Federal Forum Project, which at its peak saw more than 1m people annually attending weekly meetings on public affairs topics held in local schools.

The current Renaissance in deliberative ideas started approximately 30 years ago, arguably driven by a confluence of technology, multiculturalism and dissatisfaction with the incumbent political processes driving a renewed focus on opportunities to better harness the population’s latent civic interest. The Kettering Foundation and The Pew Charitable Trusts were the first thinktank organisations to emerge focusing on deliberation as a goal rather than carrying any specific or partisan policy agenda.

This is one deliberative variant, as set forth by Ethan Leib, following studies at Yale University (US). At the time of writing, he is Professor of Law at the University of California.

This model shares many similarities with the notion of “The Mixed Constitution” advanced by Keith Sutherland.

Why are judges considered to be appropriate moderators? Why not professional independent facilitators? Why not give citizens the skills to moderate themselves? Why are citizens’ capabilities constantly under-estimated?

What you Can Do

This is a system that will explicitly require the active support of today’s legislators at a state and federal level. It is unique as a deliberative reform proposal in that it does not call for any reduction in the present number of legislators, and as such may be considered more attractive to those who would otherwise find their careers affected. Legislators respond to popular support, and thus the most helpful action from the community is to make your support clear to your local member, and advocate that they meet with the newDemocracy Foundation to explore it in detail and have a chance to raise queries of their own.