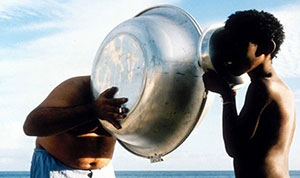 Based on a paper by Alex Zakaras, reproduced with the author’s permission .

The Athenian ideal of securing better representation (and interrupting power) by lottery is the focus of this model. There are two key differences with the Citizen Legislature and Popular Branch models which also emphasise the value of random selection. The first is that it seeks to replace the Upper House or Senate as a house of review. The second is that it prescribes basic limits on the expected role of citizens in a belief that this “manageability” will make it the pragmatic option for a step toward a non-partisan and deliberative parliament.

All adults would be eligible for selection, and can decline if they don’t wish to serve. The random group would be stratified for age and income to match census data on the makeup of the society it governs. Participants would be paid a salary equal to twice the average wage.

The chamber has reduced responsibilities – it is a house to approve or veto legislation produced by an elected legislature, and they would not be involved in drafting or altering legislation. They would also be accorded the sole power to redraw electoral boundaries.

A Bill sent from the Representatives would, after discussion, be subject to a vote as to whether it should be immediately ratified, or whether it needs a detailed review. The review committee would be drawn by lot from among their number, and work as a deliberative forum able to hold public hearings, invite expert testimony, take submissions from citizens, hear from sponsors and opponents of the Bill from the Legislature, and discuss the merits of the Bill openly among the themselves. The Committee would then report back to the Senate as a whole with each individual citizen representative presenting their own independent judgment as to whether the proposed legislation is in the public interest. There is no ‘party line’ to adhere to. Every vote is, in effect, a conscience vote. A simple majority is required to pass or reject the legislation.

a. It does not add another branch of government, and thus no additional layer of cost or bottleneck for inaction is added. Due to the lack of electoral offices and staff it is likely to cost less than most senate chambers do today.

b. Applicable to all layers of government. Where there is no house of review (eg: local government), then it is recommended that a simple proportion of seats would be allocated by lot.

c. It considerably reduces the elite bias within democracy today which requires significant funding in order to participate as a representative.

d. It will drive a different style of public discourse, as there is now a house of parliament with no partisan layer of political manoeuvring – the need to be in permanent election mode being structurally removed. Moreover, the public will now hear unfiltered views from people in similar occupations and circumstances to themselves rather than representatives professing a depth of understanding of their circumstance.

e. There will be a non adversarial layer of parliamentary discussion. There is no incentive for one senator to attack another verbally as none have a political alignment nor any prospect of re-election.

f. Draws on a broader range of occupational “real world” experience. A non-partisan group listening to those with trade and professional skills may temper some poorly conceived legislation arising from partisan and poll driven imperatives. The book by Scott Page referred below highlights that diverse groups are shown to make better decisions than expert groups – let alone homogenous political groups.

“People with kids or big careers won’t give up a year of their life to do this.”

This does create a potential for bias and a non-representative group. The suggested solution is to keep the stratified sample by replacing those who decline with someone with a matching demographic profile.

“Agenda control remains in the hands of today’s politicians.”

True. It is a compromise solution for those who see selection by lot as superior to election but seek an “incremental” starting point. However, this tradeoff brings with it a greater likelihood of adoption as it should prove to be of appeal to many legislators.

“The decisions needed are too complex for ordinary people.”

This argument is found in all the random selection (lot) models. In everyday life, this is a function of time (citizens tend to have day jobs), and thus the proposal calls for the grouping to be paid fulltime for a year. Secondly, there is mounting evidence (centrally James Fishkin’s work in Deliberative Polling) that these processes stimulate education… ‘When citizens have the chance seriously to consider competing sides of an issue, they take the opportunity to become far more informed. Their considered judgments demonstrate higher levels of knowledge and greater consistency with their basic values and assumptions. These experiments demonstrate that the public has the capability to deal with complex public issues; the difficulty is that it normally lacks an institutional context that will effectively motivate it to do so’.(emphasis added). This accords with Schumpeter’s view that citizens have no incentive to form educated, well reasoned political views as their vote counts for next to nothing and there is no cost to ill informed votes or decisions.

“Random selection is not a competence based mode of selection.”

Entirely true. The question for the citizen is to what degree the current method rewards competence. Moreover, research shows (refer to books by Landemore and Page below) that diverse groups outperform groups of subject matter experts at problem solving tasks – that the value of different perspectives can outweigh pure subject matter expertise – and in the current system the skills required are resulting in quite narrow career paths of our representatives.

That the citizens believe they can be represented by having people like them in power as overseers of the elected, even though they would have to forfeit the power of voting people out at the ballot box. It assumes that citizens can understand this trade-off, see it as representative, and will prefer it to the current structure.

As with other sortition models rendered on this website, the origins and ideas of the value of random selection are Athenian. The specifics and application as replicated here is drawn from the work of Alex Zakaras from the University of Vermont whose publications are listed below.

What level of financial transparency and limitations on future electoral involvement need to be placed on the randomly-drawn group? Are they banned from running as a lower house candidate for five or ten years to prevent their being incented to running a party line in the upper house in return for favoured nomination?

What level of legislated protection is provided so that participants can return to their employment after their year of service, and how are employers protected in this scenario?

It is anticipated that State Government will initially be most receptive to the opportunity for reform, and those who are in favour of the model should make contact with their current lower house representative.

This model focuses on replacing the Senate or Upper House. It is conceptually very similar to other lot-based models. However, these tend to focus on drawing an entire legislature (Citizen Legislature), adding another layer of government (Popular Branch), or breaking government down from a single monolithic structure into lots of independent fragments (Demarchy).