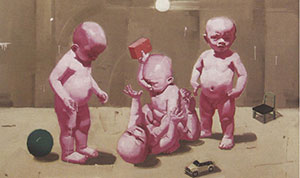 (Selective excerpts from writings by Brian Martin, University of Wollongong; and John Burnheim, reproduced with the authors’ permission.)

Today we elect a small number of people who make decisions on a wide range of issues. Demarchy, by contrast, is based on a network of numerous decision making groups. Each group deals with a specific function (i.e. transport, land use, parks) in a given area – so it’s not a “generalist” system. The membership of each group is chosen randomly each year from all those who nominate they are interested in working on that topic.

If the community decides that certain groups of people should be represented in a subject area – such as the disabled on disability policies, or architects in urban planning – then it is simple enough to draw a required fraction randomly from within these audiences.

The term of office is strictly limited, and selection of new members is staggered so that skills and experiences can be passed on to newcomers.

One of the books that first stimulated interest in sortition was John Burnheim’s Is Democracy Possible?: the alternative to electoral politics (1985). That book showed how a thoroughgoing use of sortition to decentralise decision-making might work, assuming that the necessary constitutional changes could be made. In that sense it was Utopian, lacking a practical program.

Burnheim’s new book The Demarchy Manifesto: for better public policy (2016) suggests first steps towards crucial changes that do not require any constitutional or legislative prerequisites. It suggests a practical way to enlighten, articulate and give effect to public opinion. The book backs its practical suggestions with discussion of the importance of a dynamic in which public discussion is focussed on specific practical problems at each level from local to global decisions, rather than on vague and dangerous ideological generalities. It argues for a way of organising completely open but focussed discussion to give anybody and everybody the opportunity to have a say, ensuring that all the relevant considerations are discussed, but the final assessment is made by a sample of those most substantially affected, favourably or unfavourably by the measures recommended.

a. Demarchy involves a much larger fraction of the population in making decisions of policy, thus getting us closer to ideals of democracy.

b. The group is far less susceptible to power from pressure groups, media campaigns and donors as no one individual can deliver an entire bloc of votes, nor do they have any thought of re-election nor requirement for campaign funding. The short term in office and lack of factionalisation drastically reduces key pressures which have a role in today’s policy making.

c. That representatives will return to career and community after a finite period, creating an incentive to act in an honest fashion.

d. The use of a pool of individuals eliminates “political machine” candidates and blocs of votes. No one individual can block a policy initiative as occurs in partisan democracy, nor can they groom successors from their staff to provide a future path for lobbying.

e. Greater diversity of representation, as the rigours of electoral systems tend to dissuade certain professions and personality types from contesting. This is replaced by a simple nomination to an area of interest.

f. Responsiveness to community interests is enhanced by narrow nature of mandate: rather than representatives being generalists (jack of all trades and master of none), they have chosen to participate in a defined subject area.

No. The citizenry is culturally attuned to voting as the cornerstone of democracy, and the structure needs to ensure they are (and feel) more empowered to be heard and participate. At a local government level, the election of nine councillors could feasibly be replaced by tens of demarchic groups of twelve citizens – changed annually – making a citizen’s likelihood of active participation greatly enhanced.

“Wouldn’t it be less efficient?”

No one actually knows. The reader is asked to weigh up what they mean by ‘efficiency’: totalitarian states show great rapidity in implementing disastrous policies. If it takes longer to get to a decision favoured by the bulk of the community is this delay or is this efficiency?

In one sense yes – the uneducated and the uninformed will have the capacity to nominate and a proportion will be empanelled. But is the idea of democracy to choose the “most qualified person”? If so, why do we have elections rather than having candidates submit their CV to a learned selection panel? Democracy is a system that excels from a breadth of people participating and an airing of a diversity of views – systems that have empowered a small core of intellectuals have been shown to be equally (arguably more) susceptible to large scale failures of policy (i.e. fascism, Stalinism). In a demarchy, experts would be able to present their views to the decision making bodies, placing their expertise at the service of the people but with a layer of review that could otherwise be absent.

Possibly, and few changes happen rapidly. Trials at local community levels will ideally either validate, refine or repudiate the model. If validated, it can then be trialled in progressively more wide-ranging and substantive policy areas.

That most people, when given the opportunity, have the capacity and willingness to learn about the issues and come to a well-reasoned decision as part of a group.

This idea was pioneered and advocated by John Burnheim, a former professor of General Philosophy at the University of Sydney, Australia. In his book Is Democracy Possible? (1985) John Burnheim utilized the term “demarchy” (created by Friedrich A. Von Hayek in his Law, Legislation and Liberty) to describe a political system without the state or bureaucracies, and based instead on randomly-selected groups of decision makers. This has striking resemblances to classical democratic ideas, as reported by Thucydides.

How can people be encouraged to offer themselves for selection to demarchic bodies?How important is economic structure and wealth to the viability of demarchy – is it only applicable to wealthy, highly educated societies?How could the system be undermined and manipulated?What are the results in practice at a local government level?

The newDemocracy Foundation supports research initiatives to explore these questions. Those interested should mail us  to see if your project is potentially eligible.

What You Can Do:

Local government is a great place to start, and in most states the Local Government Act gives councils the power to form local committees and be bound by their recommendations. Discussing this paper with a member of your local council is a way for you to see the system for yourself. Suggest an area of local administration in which to trial a demarchic structure and have a commitment to implement this for a three to five year period. Local councillors and their citizens are encouraged to contact the newdemocracy Foundation for assistance if you would like to conduct a trial.

Demarchy involves sortition – being random selection or selection ‘by lot’. However, sortition is not the only way to create demarchy, and thus the terms should not be used interchangeably.