Hans-Liudger Dienel spoke with Carson about the work of his father Peter Dienel who developed the planning cells model of deliberative engagement in the early 1970s and which Hans has continued to work with through the Nexus Institute in Germany.

Hans identifies that his father was a missionary for planning cells. Planning cells began out of Peter’s experience in the church. Planning cells were standardised to maximise acceptance of the process. Planning cells have 25 citizens on each and often multiple planning cells are run in parallel sessions, with expert speakers followed by un-facilitated small group work to deliberate on the ‘conflictual problem.’ The process was designed to be immune to “bad” facilitators.

They hold multiple parallel processes to generate a deliberative atmosphere in small groups meeting over four days. In particular, small groups allow people who may be less confident to be active participants.

Over the years since the planning cells model was developed they have focused on standardisation though there has been some changes. For example, citizens vote at the end of the process to reach their final recommendation which they hand over to the Government who commissioned their work, in a public event. More recently they have required the Government to report back to the planning cell members one year later. Another change has been to use the internet to promote the process to the broader public both before it happens and afterwards.

Research by one of his PhD students found that many years later participants in planning cells were still very much aware of the progress of their work and had become more politically efficacious (this research is currently only in German).

Hans noted that in Germany there is a law that workers can have up to five days off work to participate in further education or to voluntary activities. This leave isn’t paid and so people participating in planning cells are paid by the organisers for their time.

Carson and Hans have a discussion about the value of standardisation versus tailoring processes to the particular context. A potential compromise was the idea of having common standard principles but allowing some flexibility in the design of individual processes. 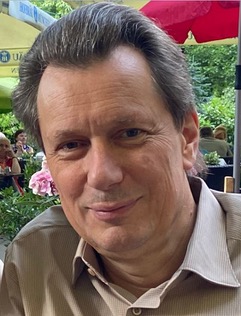 Professor Hans-Liudger Dienel studied humanities (history, philosophy), social sciences and engineering (thermodynamics) in Hannover, Washington and Munich. Since 2013, he is full professor and holds the chair for Work, Technology and Participation at Berlin University of Technology (TUB), one of  the leading German universities. Before that, Dienel was director of the Center for Technology and Society of TUB. He was visiting professor at UC Berkeley (Department of Anthropology) 2018-19, guest professor at Technical University Vienna/(Austria and visiting scholar at the Indian Institute of Advanced Study in Shimla/India. Dienel is Study Dean of TUB’s school of education and is heading two master programs in science management and sustainable mobility management. Besides, he is managing director of the nexus Institute for cooperation management, a Berlin based think tank for participative processes. His research focusses on participatory processes, deliberative democracy, digital worlds and the energy and mobility transition. He serves as board member of a couple of journals including the “Forum Qualitative Social Research” and is editor-in-chief of the Journal “Innovation. European Journal of Social Science Research” since 2017.