Ned Crosby is the American inventor of Citizens’ Juries. He and his wife Pat Benn have supported and developed these processes over many years.

In this interview, he and Pat talk about the development of the process, its refinement over the years and the more recent development of Citizens’ Initiative Review in Oregon.

Ned created the citizens’ jury process in 1971 in response to his concerns about moral relativism. He decided to ask a randomly selected group of citizens to reason and consider issues. It wasn’t until the 1980s that academics started writing about using randomly selected citizens to deliberate without much awareness of Ned or Peter Dienel’s practical work.

They set up the Jefferson Centre in 1974 to work on basic ways to improve the workings of democracy. They ran many citizens’ juries over the years including one to evaluate gubernatorial candidates’ stance on issues in Minnesota in 1990, another to evaluate US Senate candidates in Pennsylvania, and two national citizens’ juries in the US in 1993.

The Citizens’ Initiative Review process was based on the citizens’ jury process to evaluate ballot measures. Citizens’ panel is asked to determine whether to support or reject a proposed ballot measure and then their view is included in the voter pamphlet that is distributed ahead of the vote.

Ned identifies the importance of witnesses to the citizens’ jury process.

Ned mentions John Gastil and Jim Fishkin, both of whom you will hear from in future episodes of this podcast series. 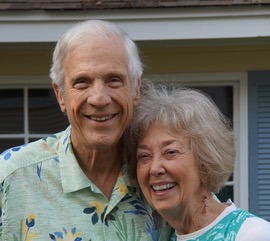 Ned Crosby invented the Citizens Jury process in 1971, while writing a Ph.D. thesis on social ethics.  He received a Ph.D. in political science from the University of Minnesota in 1973   In 1974 he set up the Jefferson Center, now the world’s oldest non-governmental organization working on democratic reforms while avoiding taking positions on public policy issues.

Crosby worked for over a decade with his wife, Pat Benn, to establish the Citizens Initiative Review in Oregon as an official part of the state’s elections system.  They were co-founders of Healthy Democracy in Oregon, the organization which conducts the Citizens Juries which evaluate the ballot initiatives.

Pat currently serves on the board of directors of the Jefferson Center in Minnesota and is a director emeritus of Healthy Democracy in Oregon.