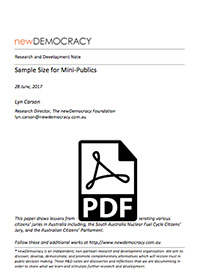 When convening a mini-public, certain basic parameters must be met: the group should be diverse and inclusive (Landemore, 2012), and it should have time and sufficient information to deliberate well (March & Carson, 2013) (See, Deliberation), and its decisions should be influential. When discussing random selection of a mini-public, an inevitable question arises “how many people do we need?”

When citizens’ juries were first developed by Ned Crosby in the US they matched the appearance of a criminal jury with 12-15 people and were not necessarily meant to be fully or descriptively representative. This seemed like a sensible group size when deliberating on complicated or complex matters.

Decision makers complained that 12-15 people is too small and insufficiently representative of the wider population. These concerns led newDemocracy to experiment with a larger cohort.

The term mini-public indicates an assembly that is a population-in-miniature, as these people will ‘stand in’ for a much larger population. The aim is to satisfy an important deliberative democracy principle: representativeness. newDemocracy thinks this is best achieved through stratified random selection. There would be other ways to ensure the diversity that is essential for deliberation (Wiederhold & Gastil, 2013) but newDemocracy has found random selection to be an excellent means to deliver population diversity.

Bear in mind, that a degree of self-selection occurs with stratified random selection because potential participants are free to decide whether or not to accept the invitation. Despite that, newDemocracy is able to attract into the decision-making space, a cross section of any community that is far more representative and diverse than would occur through an open call for participation, and is less open to influence from special interests, especially wealthier and more powerful ones. This illustration might help to explain that difference and the space occupied by mini-publics, on a continuum from voluntary to mandatory. 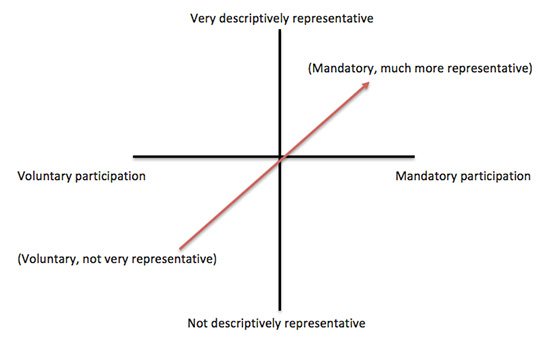 Imagine conscription of citizens into the defence forces—for example, Australian males born on a certain date. This happened during the Vietnam War. This example would be placed on the extreme right of the horizontal axis. Those drawn in a lottery were very descriptively representative of that particular age group because it was extremely difficult to decline service (although obviously not representative of the entire population).

Voting is compulsory in Australia including for constitutional amendments via a referendum. Those voters, too, would be positioned to the right as mandatory. Citizens selected for a criminal jury would hover around the central cross because there are exemptions for jury duties and opportunities to defer attendance. Citizens for a mini-public would also be positioned somewhere in the middle—certainly, way further along that horizontal axis than a public meeting or a committee. The Australian Citizens’ Parliament convened by newDemocracy had an acceptance rate of over one-third which gives an indication of its position along that axis (Lubensky & Carson, 2013).

Let’s return to sample size and the original group size of 12-15 citizens. In Australia, perhaps because early experimenters were used to teaching large tutorial groups, citizens’ juries grew in size: usually 20-25 people and seemed to deliver more lively discussion. newDemocracy began to experiment with 40+ (newDemocracy’s website has many examples of mini-publics of this size). It was discovered that a large group worked just as well, especially since a lot of small group activity takes place during a mini-public. This increased size also helped to alleviate decision-makers’ concerns that the group was too small to reflect the diversity of their entire community.

More recently newDemocracy has worked with two juries in South Australia (2016)—one with 50 people for an agenda settings stage and 300+ for the other, for a final decision-making phase. The same deliberative activities can be replicated no matter the size (See, Hearing from Expert Speakers, Critical Thinking). In Europe, the G1000 method regularly uses 1000 people and there are instances in the US through AmericaSpeaks that had even larger numbers. Western Australia, too, used 1000+ for a Dialogue with the City event in Perth. Size then is elastic as long as genuine deliberation can occur (See, Deliberation).

But what of statistical significance?

newDemocracy makes no claims for statistical representation, but instead aims to achieve a descriptive match to the population: we aim to get “people like me” involved in the decision, and can consistently achieve that with juries of 35-43 people. However, we are aware of people’s basic understanding (and some level of belief in) opinion polling so have aligned our numbers with the two critical variables (confidence level and confidence interval), as outlined below.

By way of example, our descriptive goal in South Australia was a large mass of people visibly from every walk of life, and we knew 300-350 delivered that. The statistical test outlined below arrives at 340 people for the South Australia population. Allowing for natural dropout rates for illness etc. we can be expected to land close to this number.

The following explanation applies to any population above 500,000 – beyond which the sample numbers barely move.

Our statistical aspiration is different as we are seeking common ground: 2.5% matters a lot less. But given the cost and complexity, 1 in 10 being wrong is unacceptably high. We set a confidence level of 99%, but expand the confidence interval of 7%. This equates to 340 on a 1.3m population.

It should also be noted we do a stratified sample so we know with 100% confidence our key demographic match to Census is achieved by age, gender, location and ratepayer/tenant status. Of course, other demographics may well be appropriate in different countries and for particular issues.