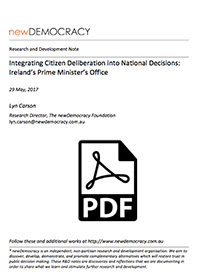 How could a prime minister’s office build trust in order to make the most contentious national decisions, and does the recent experience in Ireland help to answer this?

Why answer this question?

There is increasing world-wide distrust in politicians and elections. Democracy was borne out of distrust in political elites; it was meant to overcome this problem. However, electoral politics is now under a cloud, facing increasingly strong protest votes for parties at the periphery matched with increasing abstention. Democracy is seen as the problem instead of the solution. How are we to redeem democracy and rebuild trust?

What happened in Ireland?

A group of academics wanted to replicate British Columbia’s Citizens’ Assembly on Electoral Reform as a way of bringing everyday citizens into political decision making. The project was called “We the Citizens”. It attracted private funding and was designed to prove that public deliberation on a difficult topic among randomly-selected citizens could work. This project resembled the Australian Citizens’ Parliament which newDemocracy convened in 2009 (Carson et al) (See, Australian Citizens’ Parliament).

The ICC operated over a 14-month period, meeting over the course of 10 weekends, following deliberative practice. Its 100 members comprised 66 citizens selected by an opinion poll agency, 33 politicians from the Oireachtas and the Northern Ireland Assembly and an independent chair, Tom Arnold, who was appointed by the government (Farrell, 2017: 24).

The involvement and proportion of elected representatives in a public deliberation is unusual but can be effective. It can build trust in the process and an awareness of how public deliberation works, while also increasing the likelihood of enactment of the resulting recommendations. This should be balanced against contrary evidence, for example, a UK comparative study undertaken by Graham Smith indicated the dominance and influence of political representatives when compared to citizens in a mixed assembly. It also revealed a lack of ongoing commitment to the process, resulting in non-attendance on the final weekend of the UK experiment (Thompson, 2016).

However, returning to the Irish case study, what came out of the ICC was a series of questions, referenda, and parliamentary votes, including Ireland’s historic support for marriage equality in 2015. Support from a conservative Prime Minister challenged those who consider policy making to be about adhering to a party line. The referendum pitched traditionalists including the Catholic Church against those in favour of gay marriage, including Ireland’s Prime Minister Enda Kenny, a Catholic who told voters there was “nothing to fear”. (ABC, 2015)

The elected representatives who had participated in the ICC then became advocates for the next iteration: the Irish Citizens’ Assembly (2016-2017).

The Citizens’ Assembly is currently tackling a number of questions, the first being the highly contentious issue of abortion, followed by responding “to the challenges and opportunities of an ageing population; fixed term parliaments; the manner in which referenda are held; and how the State can make Ireland a leader in tackling climate change” (See, Citizens’ Assembly).

What has this got to do with PM’s office?

The first “We the Citizens” project was privately funded. Its findings were presented to senior government officials and all political parties’ leaders in a series of face-to-face meetings (Farrell et al, 2015). The ICC and Citizens’ Assembly have been supported by government with a full-time Secretariat seconded from the Prime Minister’s office. The Citizens’ Assembly is chaired by Supreme Court Judge, Justice Mary Laffoy, and supported by a senior civil servant, now the Assembly’s secretary.

The Prime Minister now has the capacity to request considered public judgment from randomly-selected everyday people as a counterweight to activist and interest driven advocacy which tends to dominate public discourse. This has been historic for Ireland and, following the ICC, “the first time in the world that a deliberative process resulted in real constitutional change” (Farrell, 2017:24). It highlights the strength of institutionalising deliberative practice in public office and its capacity to open up politically fraught debate in a considered evidence based setting.

Refinements, based on the Irish experience

As with all deliberative methods around the world, much worked well, and yet, minor glitches point to a need for improvements. newDemocracy’s focus as a research and development foundation is on honing deliberative practice, and learning from domestic and international experience.

The Citizens’ Assembly (with 99 randomly-selected participants), has too many reserves as a result of the public sector’s decision to have 99 substitutes. This affected participants’ commitment perhaps because there were more drop-outs than is typical. Citizens’ assemblies in other countries have impressed upon participants the importance of staying for the long haul. newDemocracy’s recommendation would be to persist with the latter approach, reducing the pool of reserves and placing strong importance on retention.

There were particular challenges with handling public submissions for the deliberation on abortion. 13,000 were received, and many used a form letter which led to considerable repetition. This number created immense challenges for the Secretariat and the Citizens, both in handling the submissions (collating, summarising them) as well as how to read or absorb the information they contained. newDemocracy is experimenting with a different approach—Online Proposal Teams—which combine deliberation with a digital approach. newDemocracy’s recommendation would be to combine this with a face-to-face gathering.

As happens with many government-commissioned deliberative methods, bureaucrats interfered with process design—the reserve list mentioned above being one of a number of alterations to the original design. The importance of process design is often undervalued. newDemocracy’s practice and recommendation is to create distance from the decision maker—this in turn leaves process design in the hands of deliberative designers and instils trust in the independence of the process.

With the Citizens’ Assembly, topics had to be dealt with in order. Following the lengthy abortion debate, all other topics must now be covered rapidly, leaving only a single weekend for each topic in order to meet the prescribed deadline. The length of time required for deliberation is often under-estimated, again by those inexperienced with public deliberation. This can be overcome if process design is left in experienced, independent hands.

Despite this national experiment, so unusual in global terms, and the six years since the democratic experiment began, there is very little happening at the local level in Ireland, especially in comparison with Australia (See, newDemocracy’s many local and state case studies).

Farrell, D. (2017). “Collaborate to innovate: Connecting people to politics in order to make a difference”, Towards the Good Society, Dublin: UCD College of Social Science and Law