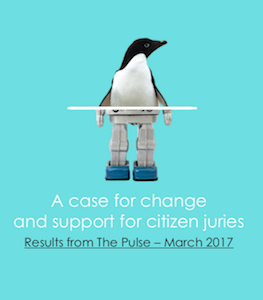 In March 2017, Pollinate Research conducted a quantitative study that takes the ‘pulse’ of Australians on a range of issues and concerns. Pollinate is an independently owned and run research agency based in Sydney, and has conducted similar work on a regular basis since 2007. Each round of research samples 1,000 respondents nationwide, and this latest round included a series of questions for newDemocracy, designed to give an insight into trust in Australian democratic structures and system; how everyday Australians want those structures and systems to work better; and what they see as their role in its achievement. The research was conducted on a pro-bono basis by Pollinate.