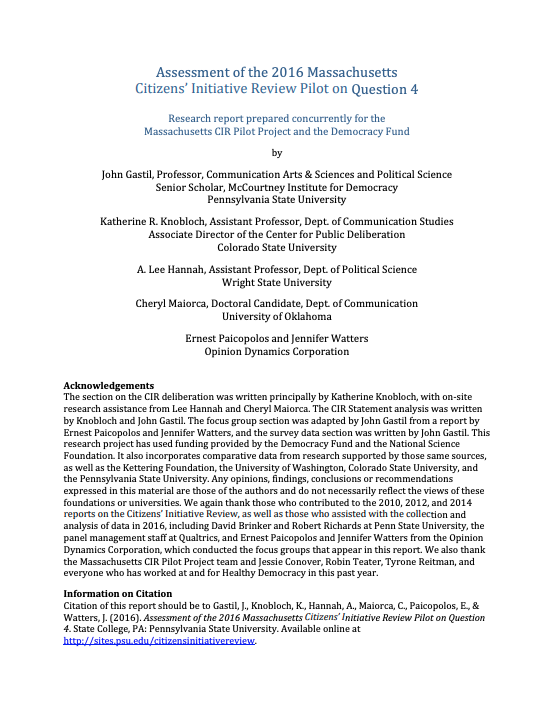 You can read the research paper here.

This report provides detailed analysis of 2016 Massachusetts Citizens’ Initiative Review (CIR). The CIR is a low cost public judgment mechanism that gives a group of randomly-select citizens the time and information to provide advice to people voting on CIR proposals. The mechanism sees  over 50% of people in the affected electoral districts being aware of the process, and over 40% of voters reported reading them before voting. The following report goes into this in more detail.

This report provides an overall assessment of the quality of deliberation that took place during the 2016 Massachusetts Citizens’ Initiative Review pilot project, as well as the quality, utility, and impact of the resultant Citizens’ Statement that review produced. We focus on the 2016 CIR but make reference to earlier findings from our reports that assessed the 2010, 2012, and 2014 CIRs in other locations.

The Oregon legislature created the Citizens’ Initiative Review (CIR) in 2009 to help voters make informed choices on statewide ballot measures. After convening two CIRs in 2010, the Oregon legislature made this process a regular institution in 2011. Thereafter, the Citizens’ Initiative Review Commission has overseen two Oregon CIR panels in 2012, two in 2014, and one in 2016. A pilot CIR was implemented statewide in Colorado and in two localities in 2014 (Phoenix, Arizona and Jackson County, Oregon).

The 2016 CIR pilot project was the first statewide test of the CIR in Massachusetts, and it was held August 25-28 in Watertown. The Massachusetts CIR Pilot Project team convened a stratified random sample of 20 registered voters to study and deliberate on Question 4, the Massachusetts Marijuana Legalization initiative, which proposed to “legalize marijuana but regulate it in ways similar to alcoholic beverages.” Citizen panelists heard from and questioned the campaigns on either side of the issue, questioned neutral policy experts, and deliberated intensively as a full panel and in small groups, then wrote a one-page analysis of the proposition.

The 2016 CIR pilot project was exceptional among previous pilots both in the rigor of its random sampling and its attempts at distributing a Statement that did not appear in an official voter guide. Beyond merely posting a project website, the project team conducted a robust media campaign to help distribute the Statement to as many voters as possible.

Our assessment of the Massachusetts CIR focused on two aspects—the process and its reception by voters. This included direct observation of the panels, surveys of the citizen panelists, detailed assessments of the Citizens’ Statement, a usability study of the Statement, a survey of the Massachusetts electorate, and focus groups with Massachusetts voters. This paralleled and added to the methods used in our CIR evaluations from 2010-14. This report includes occasional comparative references to those earlier CIR panels, including all previous Oregon CIRs and pilot CIRs from 2014 run in Colorado, Phoenix, and Jackson County (Oregon). Those who wish to learn more about previous findings in this research project can read them here.