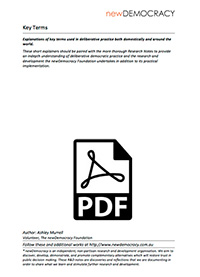 What is the planning cell method?

Planning cells are a form of deliberative democracy used as a decision making tool to develop a set of solutions to a problem delegated by a government body or organisation. The method encourages its participants to come to a neutral, fact-based conclusion that takes into consideration the views of all parties involved.

The method is designed to increase citizen participation and improve outcomes for contentious issues, and also to reduce real or perceived imbalance of power between everyday citizens and decision makers in power. Planning cells have had a long and varied history of successes since the 1970s, and have been used at local, state and national levels.

The method traditionally involves between 12-25 paid participants who are selected to be representative of those who are affected by the issue or investigation. A group of moderators is in charge of participant selection, organising subject matter experts to present to the group, preparing documentation and facilitating the proceedings.

Traditional responses and the case for planning cells Planning cells are traditionally used in response to issues where government intervention has been unwieldy or unpopular. Typical issues resolved in this fashion may be seen as illegitimate and potentially repealed.

The aim of a planning cell is to combat biases inherent in these decisions. planning cells may be implemented as part of an institutional strategy or to specifically target an area where it is contentious for institutions to preside over. One such example of a group deliberating in the fashion is the California Citizens Redistricting Commission, which discusses and delegates electoral district lines and is made up of citizen representatives from all sides of American politics (Johnson & Gastil, 2015).

While a planning cell offers a chance for citizens to become more involved within a political system, planning cells and similar deliberative methods all carry their fair share of challenges. A lack of ‘buy-in’ from the public can make the planning cell and decision making bodies be seen as making a token display (Cooper et al., 2012), which can detract from legitimacy.

This can be a result of poor facilitation, for instance in Britain when a Citizen Council created for the National Council for Clinical Excellence resulted in ineffective debate in the planning cell (Davies et al, 2006).

Another concern for facilitators of planning cells is an over-representation of ‘the usual suspects’ i.e. participants who are already involved with a specific interest which can reinforce unequal participation across social groups (Lijphart, 1997). A potential solution here is to practise genuine random selection and not inviting professional citizens who are active and are less likely to represent any extremes.

What important questions remain for use in Australia?

In Australia, planning cells would sit among other deliberative democratic methods that have been used in various local and state settings. However there is a lack of larger-scale deliberative projects in Australia, and even the world, from which to draw experience and historic data. In countries like Britain and Germany, success in planning cell outcomes has been attributed to effective leadership and good governance by facilitating parties (Cooper et al., 2012).

In order for planning cells to be successful and come to legitimate decisions, research shows that they need to be embedded and empowered alongside existing institutions (Johnson & Gastil, 2015). planning cells requires funding, time and dedicated resources in order to be successful, and this will require political will for them to become institutionalised at the respective local, state or national levels. It is only in this way that citizens can become empowered and make decisions with real impact.

More information about the planning cell method can be found at: