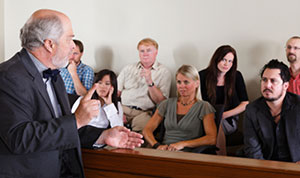 Based on the paper ‘Democracy Through Multi-Body Sortition’ by Terry Bouricius, published to the Journal of Public Deliberation (Vol.9 Iss. 1, Article 11. Available here).

The breakdown by functions are:

2. Developing bills: Once a topic is selected, there is a call for volunteers for Bill Drafting Panels (12 to 20 members each, mixed by lot or self selected, unpaid, serving just for the duration of the Bill drafting, assisted by Executive staff). Bill Drafting Panels would encourage a range of interests to help draft bills that could hopefully pass review, and ultimately be adopted, by other bodies. If there are many Bill Drafting Panels, there could be a super-majority requirement to advance a bill to the reviewing stage.

3. Reviewing bills: For each issue area, there is a larger Bill Review Panel, randomly selected drawn from a pool of the willing – however, the issue area they will be assigned to is also randomised. They serve rotating terms of a year or more, so they can develop expertise in their area. Review Panels review draft bills from Bill Drafting Panels, take testimony, hold hearings, amend, combine, etc. and produce final proposed bills by majority vote.

4. Voting: Each bill is voted on by a one-time Policy Jury which is as descriptively representative as possible. Jury members meet for a day or two, listen to pro and con arguments, and vote by secret ballot, without internal debate, in order to avoid “group-think,” or domination by those with high social status. The secret ballot minimizes the social pressure of voting, and the risk of vote buying.

This model can be implemented in a variety of ways, ranging in scope from small incremental changes to fundamental basic reforms. For example, a version of this model could be used to:

a. Make one law

b. Make any laws concerning a particular issue – for example, a topic that is so contentious that elected officials would actually prefer to delegate it to citizens, or where legislators have a conflict of interest, as in redistricting or electoral law.

c. Enhance the deliberative quality of an existing initiative and referendum process, or create a new one.

d. Replace one elected house of a bicameral legislature

a. Reduce the perception of outside influences: Citizens who are selected by lot don’t need to win elections, so they are free from pressures to please donors, party factions, interest groups, the media, or to get a higher opinion poll rating.

b. Truer representation: The proposed randomly selected bodies would be much less “elite” than elected legislatures, and much more like a representative sample of the people as a whole.

c. Democratic Ideal: Much greater opportunity, and much more equal opportunity, for citizens to participate in making laws (not just “providing input”). Citizens who have “no time for politics” could still participate in a policy jury for a few days.

f. Separation of powers (“checks and balances”): By separating agenda setting, the writing of bills, review of bills, voting, and rule making, the proposed design reduces conflicts of interest and the accumulation of too much power in any one body.

g. Better deliberation: Free from the pressures of winning elections and furthering their political careers, citizen-lawmakers would be much more free to discuss and debate issues on their merits, and seek win-win opportunities, instead of the partisan game of “point-scoring” that is so common in elected legislatures.

The job of any citizen-politician in this design will be much simpler than the job of an elected legislator. For true subject matter expertise, they will rely on staff and consultations with experts, just as elected legislators do. And a diverse group of citizens working together will likely have a good set of strengths that complement each other.

“These randomly selected people won’t be able to stay in their jobs long enough to develop expertise.”

The terms for each body are designed to allow members to become competent at their jobs. If they want to stay involved in politics over the long term, they can become professional government staff, serve repeatedly on Bill Drafting Panels, or work for a civil society organization or the media. The benefit to society in having politicians in office for multiple terms is less than the benefits of giving many more ordinary citizens a term in office, plus reducing the risk of corruption.

“People selected by lot can’t be held accountable the way that elected politicians can.”

In a body that’s a good sample of the people as a whole, the main accountability that members need is to their own views of what’s right. Since few voters know what their representatives (generally elected from “safe-seat” districts) actually do, there is little accountability to voters. Elected politicians are mainly “accountable” to donors, political party leaders, and special interest groups. Randomly selected citizen-law-makers can be accountable to their own consciences, and to the judgment of members of their communities.

“Most people just won’t have time for this kind of commitment.”

The design includes different terms of different kinds of bodies. Many people could spare a few days to a week to serve on a policy jury, just as they do with trial juries today. Others could make a part-time commitment to serve on a Bill Drafting Panel drafting a bill, just until the job is finished. Fewer people would be willing to serve on the bodies with longer terms, but there should be enough of them.

“We need to make government simpler! Creating all these different bodies makes things much too complicated.”

The people whose jobs really are too complicated are today’s elected legislators. It is challenging for a legislator to read all the materials they are expected to vote on. In contrast, a member of any of the proposed bodies would only deal with a fraction of the responsibilities of an elected legislator. They also have done none of the work required in campaigning and retaining their seat.

a. That randomly selected groups of ordinary citizens (as a whole, though not necessarily each individual member) are capable of competently performing all the lawmaking tasks of elected legislators, if they have the right support and if each body has a narrow enough scope of work.

b. That legislators will do their jobs better if they are free to vote for what they believe is best, and aren’t under pressure to please their donors, political party leaders, interest groups, and the media, in order to get elected and re-elected.

c. That dividing law-making responsibilities into separate bodies can reduce conflicts of interest, avoid excessive concentration of power, allow checks and balances, enhance genuine deliberation, provide many more opportunities for meaningful participation, and greatly simplify the task of each body.

This design is based on a new view of ancient Athenian democracy – specifically, their “mature democracy” in the period 403-322 B.C.E. as described by Mogens Hansen in his authoritative book, The Athenian Democracy in the Age of Demosthenes. Contrary to most accounts by political scientists, the Athenians in this period developed a form of representative (not “direct”) democracy, arguably more democratic than contemporary forms, that worked at a scale much too large for most decisions to be made in mass face-to-face meetings. They did this through the combination of two design strategies – choosing most of their public officials by lot, and using multiple special-purpose bodies (some ongoing, some temporary) instead of one or two all-purpose legislative houses.

This design has many similarities to other modern proposals to incorporate sortition into the legislative process, especially demarchy and Gastil and Richards’ proposal for a multi-body initiative and referendum.

What kinds of experiments could be designed that would test different aspects of this design on a small scale – say, on one issue, or at a municipal level?

In a “mixed” implementation that retains one elected house, to what extent might the elected house be in permanent conflict with the randomly selected bodies? What could be done to prevent this problem, or to reduce the damage if it did occur?

Although this model is scalable, and could be applied to the local, state, national, or even international levels, it would probably be easiest to start by advocating a trial of the model on a single issue basis. The simplest scope to start with would be to identify one law that needs to be written or changed, and that politicians would actually like to delegate to citizens (probably because any decision they make will result in outrage from one group or another), and use a simplified version of the model to develop alternative bills, review and modify them, and come to a final decision.

The key difference between this model and the Citizen Legislature, Senate Drawn by Lot, and Popular Branch is the use of multiple randomly selected bodies with different functions (some ongoing, some one-off) instead of one all-purpose randomly selected body. The use of multiple bodies (including temporary bodies) avoids conflicts of interest, disperses power, reduces opportunities for corruption, provides checks and balances, provides many more opportunities for participation, makes it much easier for each person to do their job well, and makes it possible to vary the terms of service, compensation, etc. based on the requirements of the work and the needs of citizens.

The key difference between this model and Demarchy (proposed by John Burnheim – see below) is that Demarchy would eliminate general purpose governments altogether, whereas this model proposes a much less radical change, by leaving the structure of political units intact.