Jason Diceman is an experienced facilitator based in Toronto, Canada. He created a very useful tool, Feedback Frames (previously in the form of Idea Rating Sheets and, earlier, Dotmocracy templates).

His latest invention enables score-voting on participant-generated ideas, rather than a crude survey or voting tool.  It’s being used throughout the world and deserves attention from those who facilitate public deliberations. 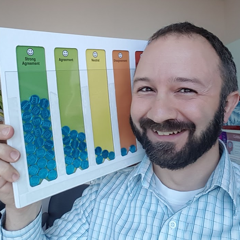 Jason Diceman is the inventor of Feedback Frames, an analogue hardware tool for secret score-voting on participant generated ideas using tokens that stack and produce instant visual graph-like results.  Previously he created the paper-based “Dotmocracy Sheets” templates (later renamed “Idea Rating Sheets”) which have been adopted by meeting facilitators in over 33 different countries and translated into more than 15 different languages.

Jason has also been a Senior Public Consultation Coordinator for the City of Toronto since 2010, facilitating multi-stakeholder workshops and public engagement meetings on a wide range of municipal government issues.