In this episode, Simon Burall, Senior Associate with Involve (UK), explores the institutional arrangements that might effectively bring the public into important decisions about science and technological innovation. This is less about how to facilitate a public deliberation and more about the creation of a deliberative system by effectively combining public dialogue and public deliberation elements. 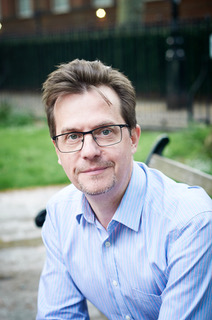 Simon Burall is a Senior Associate of Involve. He has long and extensive experience in the fields of democratic reform, open government, public participation, stakeholder engagement, accountability and transparency, scientific and technology innovation and organisational change. He has worked at the local and national level in Africa, Asia and Europe as well as on related issues of global governance and democracy.

His current role will see him leading an expansion of Involve’s work on science and technology. This Citizens and Science programme will focus on developing more effective ways for citizens to be involved in the development and application of new technological innovations with a particular focus on data and artificial intelligence.

Simon has published extensively on issues related to democracy, participation, accountability and transparency.

Simon is the Programme Director for the Sciencewise Programme, a member of the Nuffield Council on Bioethics and a Fellow of WWF UK. He was a trustee and member of Council for Voluntary Services Overseas from 1997-2007, and a Trustee and Chair of Democratic Audit, 2008-2014.

Simon was Director of Involve from 2009 – 2017. Before moving to Involve Simon was a Research Fellow at ODI from 2006 – 2009. His interests included stakeholder engagement in the reform of the international aid delivery system and the effectiveness of development finance. Prior to this, he was the Executive Director of the One World Trust from 1999 – 2005 where he initiated and oversaw the development of the influential Global Accountability Index. Simon has taught English in Namibia and science in Zimbabwe and was an election monitor in Bosnia Herzegovina after the Dayton Agreement.

Simon has a BA in Natural Sciences and a PGCE from Cambridge University, and an MSc in Development Studies from SOAS.