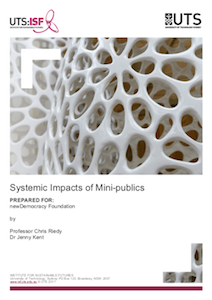 You can read the full report here.

A mini-public is a democratic innovation that brings together a small, representative group of citizens to deliberate and advise on a decision, or sometimes make a decision. Members of mini- publics are often randomly selected from the community. Mini-publics include such innovations as citizen juries, deliberative polls, consensus conferences, and citizen assemblies.

Mini-publics are one expression of the theory of deliberative democracy. Deliberative democracy puts ‘communication and reflection at the centre of democracy’ so that democracy ‘is not just about the making of decisions through the aggregation of preferences’ but ‘also about processes of judgment and preference formation and transformation within informed, respectful, and competent dialogue’ (Dryzek 2011, p.3). Thus, deliberative democracy puts talking, rather than voting, at the heart of democracy (Chambers 2003). Anybody can engage in deliberation, which is recognisable by a ‘deliberative stance’: ‘a relation to others as equals engaged in the mutual exchange of reasons oriented as if to reaching a shared practical judgment’ (Owen & Smith 2015, p.16).

While mini-publics have been very successful at facilitating deliberation amongst participants, they often lack influence and authority, which means their recommendations are too rarely implemented. Recognising the limitations of discrete deliberative experiments such as mini-publics, democratic theorists have recently turned to a systemic view of deliberative democracy in which the goal is to advance the deliberative capacity of entire political systems (Chambers 2009; Curato & Böker 2016; Elstub, Ercan & Mendonça 2016; Owen & Smith 2015; Parkinson & Mansbridge 2012; Stevenson & Dryzek 2014). A deliberative system is one in which the institutions and networks of governance support a deliberative approach to political conflict and problem-solving at a whole-system scale (Mansbridge et al. 2012).

The systemic view of deliberative democracy brings questions about the relationship of the mini- public to broader political systems to the fore. It invites assessment of how mini-publics fit into democratic systems, and how they can be run in such a way as to promote a deliberative stance, thinking beyond the boundaries of the event. This research project asks what mini-publics contribute to democracy from a systemic perspective, and how that contribution might be strengthened. For evidence, we draw on three mini-publics supported by the newDemocracy Foundation during 2015 and 2016: the Penrith Community Panel; the Noosa Community Jury (on management of the Noosa River); and Infrastructure Victoria’s citizen juries.