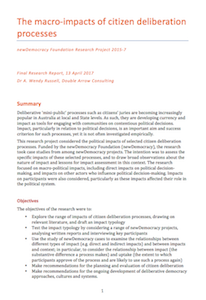 Deliberative ‘mini-public’ processes such as citizens’ juries are becoming increasingly popular in Australia at local and State levels. As such, they are developing currency and impact as tools for engaging with communities on contentious political decisions. Impact, particularly in relation to political decisions, is an important aim and success criterion for such processes, yet it is not often investigated empirically.

This research project considered the political impacts of selected citizen deliberation processes. Funded by the newDemocracy Foundation (newDemocracy), the research took case studies from among newDemocracy projects. The intention was to assess the specific impacts of these selected processes, and to draw broad observations about the nature of impact and lessons for impact assessment in this context. The research focused on macro-political impacts, including direct impacts on political decision- making, and impacts on other actors who influence political decision-making. Impacts on participants were also considered, particularly as these impacts affected their role in the political system.