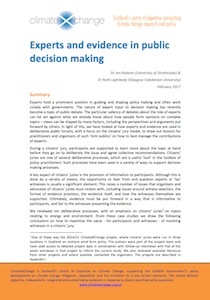 During a citizens’ jury, participants need to learn more about the topic at hand before they go on to deliberate the issue and agree collective recommendations. Citizens’ juries are one of several deliberative processes, which are a useful ‘tool’ in the toolbox of policy practitioners. Such processes have been used in a variety of ways to support decision making processes.

Following ClimateXChange’s project on citizens juries we have reviewed ten similar projects to understand how witnesses are being involved in different ways.

The report looks at a range of issues relating to the expert witnesses, including scope and selection, recruitment, and their specific roles. A more detailed research report will also be published at a later point.