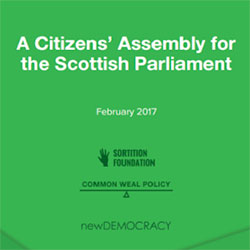 New report coincides with art exhibition at Dunfermline Fire Station Collective developing designs for a national monument to citizenship.
A DETAILED plan for a new Citizens’ Assembly, acting as a second revising chamber in the Scottish Parliament, has been published by Common Weal, the Sortition Foundation and newDemocracy in a new report.

‘A Citizens’ Assembly for the Scottish Parliament’ can be read in full here.

Authored by Dr Brett Hennig, co-founder of the Sortition Foundation – a non-profit organisation advocating citizen led deliberative democracy – in collaboration with Lyn Carson and Iain Walker from newDemocracy – an independent research organisation that trials new models of democratic decision – the report argues that a Citizens’ Assembly would be a “profound increase in the legitimacy of Scottish laws by providing solid evidence of the considered endorsement by a representative sample of deliberating Scottish citizens”.

The assembly have powers to hold inquires into “significant matters of public concern” and to “review the quality and practises of specific instances of parliamentary democracy”.

A number of implementation questions are addressed in detail including the size of the Citizens’ Assembly, the length of time a citizen would serve on the assembly and how they would be selected.

“The instigation of the world’s first CA in a parliamentary setting would be a momentous decision and put Scotland at the forefront of democratic innovation and citizen empowerment and engagement. It will, by necessity, be an immense learning experience and governments around the world would all turn to Scotland to observe the outcome,” the report concludes.

“Scotland could pioneer a new kind of democracy for the 21st century in which power is broadly shared and people feel like they are at the heart of decision-making.” Robin McAlpine

“The loss of faith that many people feel towards politics is not entirely fair, but it’s not entirely wrong either. The political system has become more of a closed shop and over recent decades the voice of citizens has taken second place to the voices of a political insider class. A Citizens’ Assembly would be a powerful voice for citizens at the heart of our political system and it would be an effective watchdog on professional politics. Scotland could pioneer a new kind of democracy for the 21st century in which power is broadly shared and people feel like they are at the heart of decision-making.”

Hennig, author of ‘The End of Politicians: Time for Real Democracy’, said: “Our democracy should be responsive to the informed wishes of the people – but many people have lost faith in politics and political parties to deliver this. Putting ordinary people back into politics is one solution to this crisis of legitimacy. But it is not knee-jerk, raw citizens’ opinions that should guide us, but citizens’ considered and informed judgement. This is what a citizens’ assembly would do. A Citizens’ Assembly in the Scottish Parliament would increase the legitimacy of Scottish laws by providing solid evidence of support from a representative sample of deliberating Scottish citizens.”

New Exhibition to develop design for a national monument dedicated to citizenship.

Coinciding with the report is a new art exhibition by Iain Moir at an old Fire Station in Dunfermline now known as Fire Station Collective, a new high quality contemporary arts hub. The exhibition, titled ‘Citizen Spire’, is a new concept to develop and design a national monument dedicated to citizenship. Open 3 March to 2 April, the exhibition will feature work by different artists, architects and craftspeople who have been invited to interpret the core vision of a giant, four-sided spire for citizenship, including a design that holds a cafe, lecture theatre, debating chamber, cinema and vista room. You can visit the Fire Station Collective exhibition Carnegie Drive, Dunfermline, Fife, KY12 7AN.