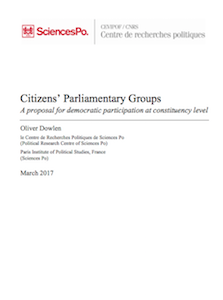 A proposal for democratic participation at constituency level

This is a feasibility study for a scheme for citizen participation based on randomly-selected Citizens’ Parliamentary Groups (CPGs). The essence of the scheme is that there would be a CPG in each parliamentary constituency. The main role of the CPGs would be to defend the fairness and integrity of the political system. They would approach this in three distinct ways: 1) by ensuring that the MP adheres to the agreed code of parliamentary conduct 2) by acting as a link between the MP and the wider constituency 3) by making sure that issues of grave public concern receive proper parliamentary attention.

The study looks at how a scheme of this nature could work in the contexts of the various parliamentary institutions of the UK and Australia. It looks at the balance between the three tasks, the powers needed for their successful operation and the possible constitutional status of the CPGs. Details are put forward concerning the mode of selection, remuneration, regulation, internal structuring and other aspects of the CPGs.

The central portion of the study then examines the feasibility of the scheme from three points of view: political logic, design logic and the logic of the proposed contexts of application. The section on the political logic looks at feasibility in terms of the possible desirability of the overall democratic trajectory of the scheme. The analysis of design logic takes place under a number of headings including space, time, number and points of contact. The contextual analysis takes a more detailed look at how the scheme might work in the parliamentary institutions of the UK and Australia.

After the conclusion there is a brief discussion on how further democratic developments might follow from the scheme and a series of appendices that include hypothetical examples of how the scheme might operate in practice.