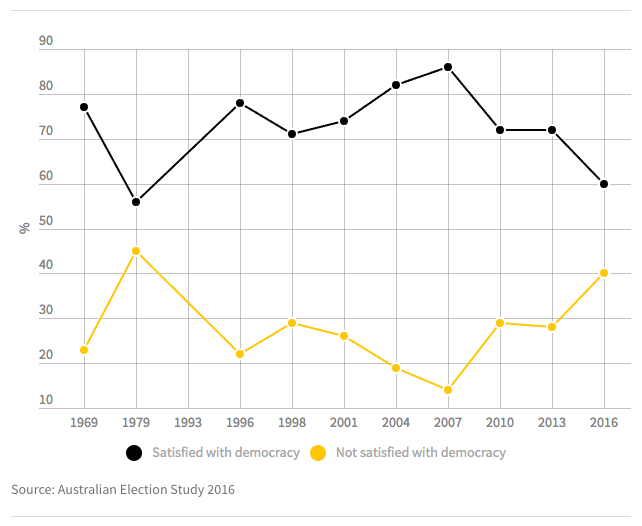 Australians’ satisfaction with democracy has collapsed to its lowest level since the Whitlam dismissal, according to a major study that shows the country in an increasingly dark and distrustful mood about politics and the economy.

The survey, conducted by the Australian National University, portrays a populace that is increasingly disdainful of government, lacks allegiance to the major political parties and has little trust in politicians’ abilities to improve the country’s economic performance.

The researchers who conducted the 12th Australian Election Study said the findings were a “wake-up call” that the conditions that led to recent political upheavals seen in Britain and the United States also exist here.

“Public satisfaction with our democratic processes and public trust in the politicians we elect are at some of the lowest levels ever recorded,” lead researcher Ian McAllister said.

“You are seeing the stirrings among the public of what has has happened in the United States with the election of [Donald] Trump, Brexit in Britain and in Italy.

“This is the start of something that has happened overseas and it’s coming here.”

The study, based on interviews with 2818 people in the three months following the July poll, has been conducted after each election since 1987, with some issues tracked since 1969.

These 10 charts demonstrate the size of the problem: 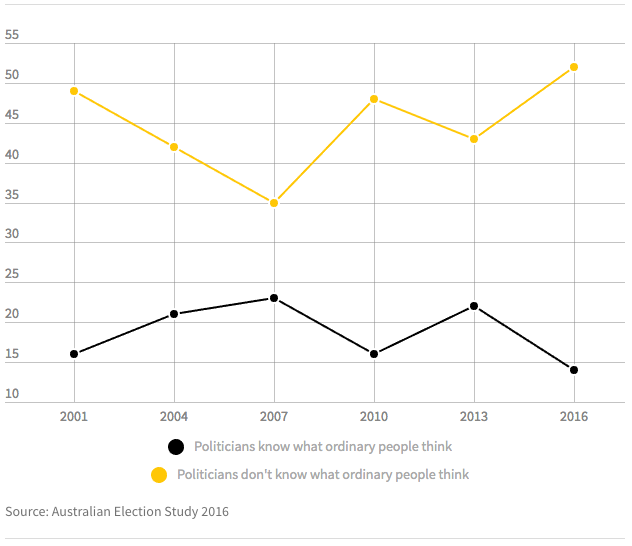 Australian politicians are increasingly viewed as out of touch with the concerns of voters. Fifty-two per cent of respondents said politicians don’t know what ordinary people think, the highest result since this question was first asked in 2001. 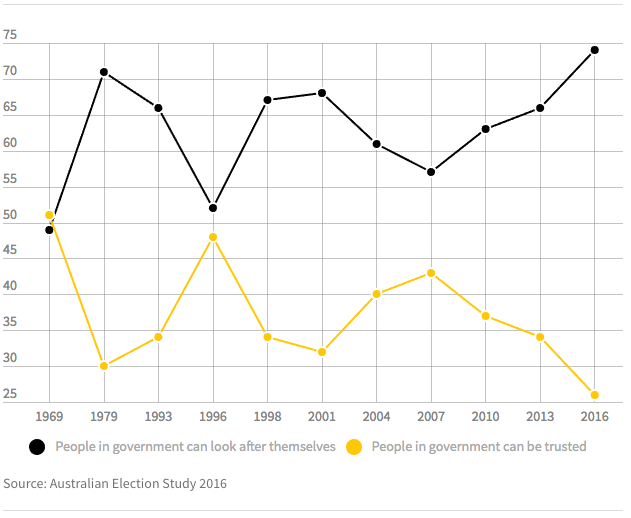 4) Who the government is run for 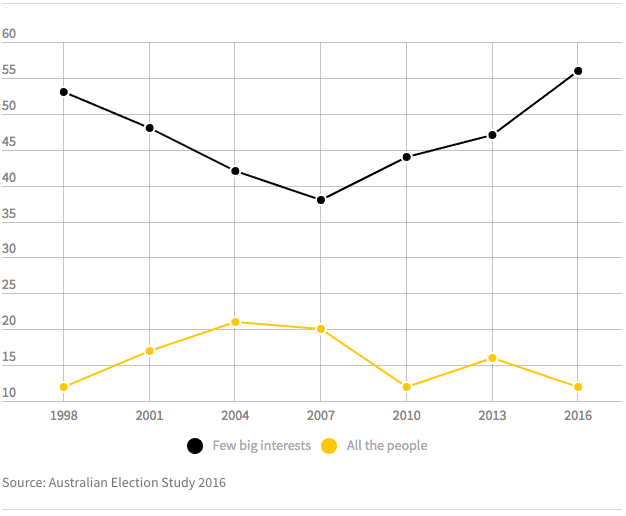 5) Interest in the election 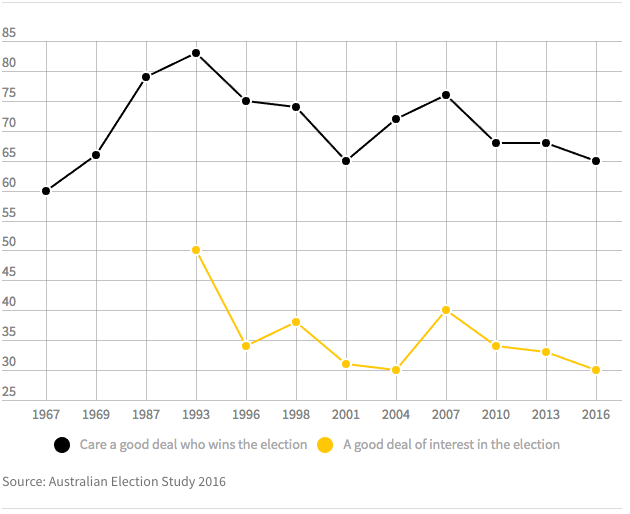 The eight-week double dissolution election campaign failed to resonate with voters, with a mere 30 per cent saying they had a good deal of interest in the election. Sixty-five per cent of Australians said they cared a good deal who won the election, the second-lowest on record. 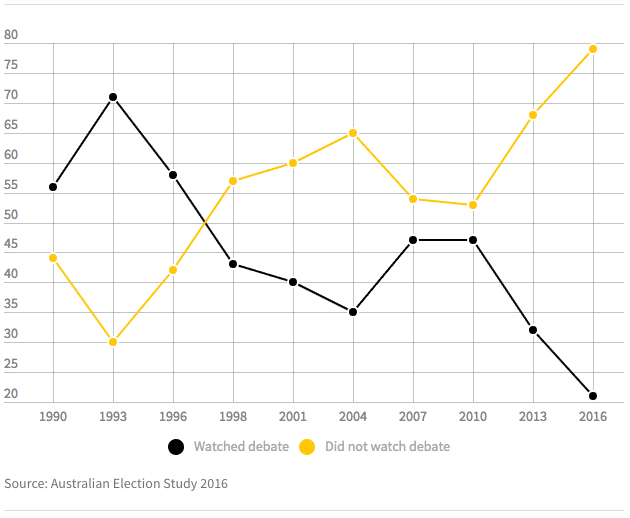 Lack of interest in the election led Australians to turn off their TV screens during the campaign. Twenty-one per cent of respondents said they watched the leaders’ debates – the lowest on record. This is significantly down on 32 per cent in 2013 and 47 per cent in 2010. 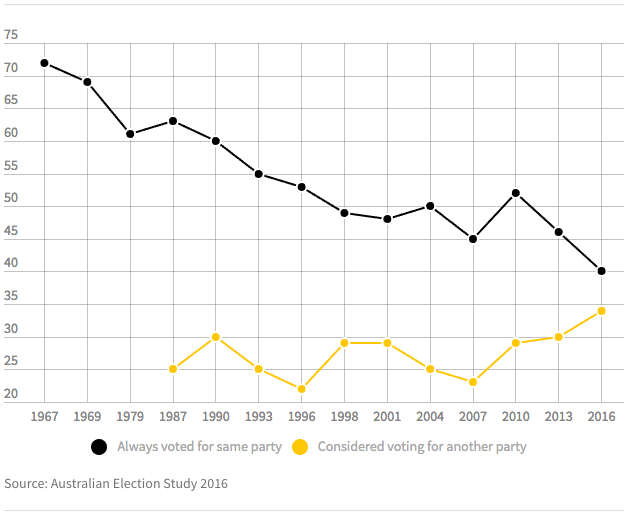 Australian voters are becoming increasingly volatile and are willing to change their vote from one election to the next. Just 40 per cent of respondents said they always voted for the same party, down from 63 per cent in 1987. A record low 34 per cent of voters said they used how-to-vote cards and record low described themselves as Labor or Liberal partisans. 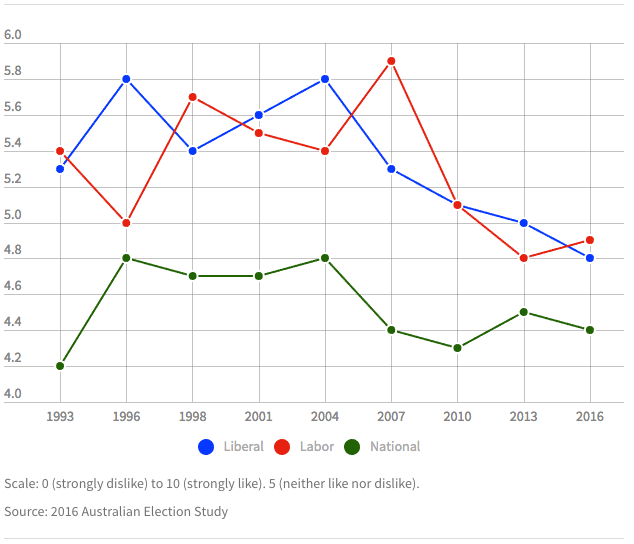 Australians voters have never shown such dislike of the major political parties. On a scale of zero to 10 (zero being high dislike and 10 highly liked) respondents scored Labor a 4.9, the Liberal Party 4.8 and the Nationals 4.4. 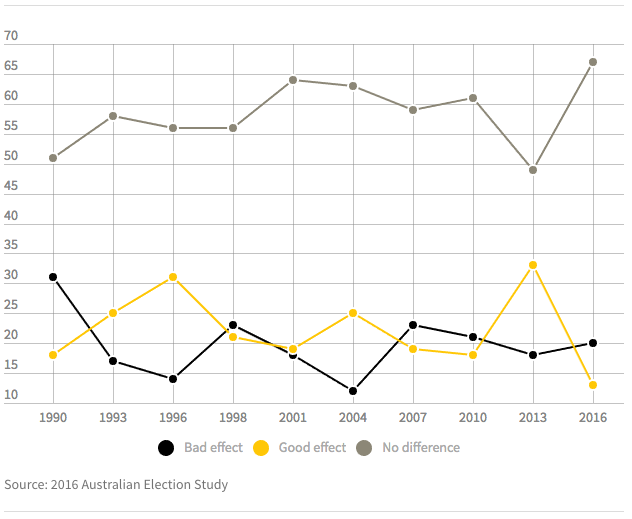 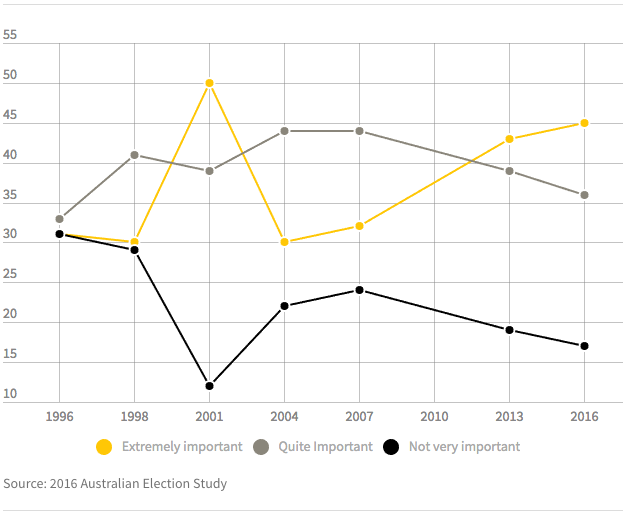 Although asylum seeker boats have stopped arriving in Australia, the issue has spiked to its highest level of importance to voters since the Tampa election of 2001. But other evidence shows Australian attitudes to migrants are softening. Forty per cent believe the number of migrants in Australia has gone too far, down from 52 per cent in 2010. More Australians support boat turnbacks than not, but support is at its lowest level on record.