This time of the year makes you reflect. I’m 64, a Baby Boomer/silver-spooner. My Italian immigrant parents did the heavy lifting, building the patrimony that I now enjoy. This year, I spent the Christmas holidays in Tasmania with my wife, son and daughter. We visited Port Arthur and, in one of the galleries, came across this illuminating, enigmatic query: “Were convicts evil brutes, habitual criminals, tragic victims of poverty and oppression, or heroes of the class struggle? Were administrators brutal sadists or well intentioned, if mistaken, philanthropists? Only one thing is certain: we filter the truth through what we want to believe.”

I want to believe that that’s not true, but there’s no escaping our mindsets. Truth and fake news may be trending, what with The New York Times banging on incessantly about Donald Trump and that “the truth is more important than ever”. The truth is closer to home than we often wish to admit. I run my small passive investment business (aka “family” office) with two talented executives and, together with my brother, and his office, we manage the larger patrimony. Over the last five years, our investments have ridden the wave of post-GFC growth. It didn’t require a whole lot of skill, and honestly, I don’t find finance all that interesting. Of course there’s a degree of work involved, and dividends, which have funded a lifestyle in art, yachting and politics.

Contemporary politics is alienating a growing part of the population. Yet the majority, including many of those turned off, think that our democracy can self-correct to accommodate an ever-evolving electorate. That’s understandable, but I don’t subscribe to that view. I think our political system is sclerotic and unresponsive to the need for real change. It’s captive to a mindset that free and fair elections are inviolate, even when political campaigns do little but promote puerile bickering.

There is a lack of respect for the politician as a vocation, with our honourable members ranking down with car salesmen. We now have only a quarter of the population who trust politicians to do the right thing. Our representatives are forced into unpalatable alliances, with no leader or party able to reign for long, and with campaigns just excercises in cheap point-scoring, is it any wonder that politicians – and politics – are held in such low regard?

Moreover, if we would be thinking that the antagonistic politics were producing stronger policies, we would be mistaken. Of the 20 high-profile federal and state programs investigated last year, less than half were assessed to have undergone a robust process. The National Energy Guarantee and the submarine program were deemed substandard. Notwithstanding the seemingly irrefutable value of Evidence Based Policy (EBP) process, ministers and mandarins privately admit that realpolitik triumphs. They say EBP process is a “luxury”: either there isn’t time or money or – more often – there is limited political will. A prime minister, premier, minister or a cabinet usually opts for a particular policy approach and no amount of persuading can change that course.

There’s also the predicament of the Opposition, minor parties and independents: they don’t have the necessary resources to do EBP.

When democracy was originally conceived, elections didn’t feature. The debate was focused on issues – not personalities and/or parties. The Athenian Council was selected by lot, among rich and poor men. There was no contest for candidature. It was the jury process. Democracies in the modern era chose elections, thinking that the transparent tournament would produce a meritocratic assembly. Politicians may start off well-intentioned, but they quickly accede to realpolitik, focusing on electoral success rather than good government.

There are promising alternatives to the groundhog day of current politics. Deliberative polls, citizen assemblies and citizen juries are showing how to constitute a more collaborative and productive legislature. For as long as we continue to elect representatives the way we do, we’ll keep throwing up salesmen rather than statesmen. That’s my truth filter. 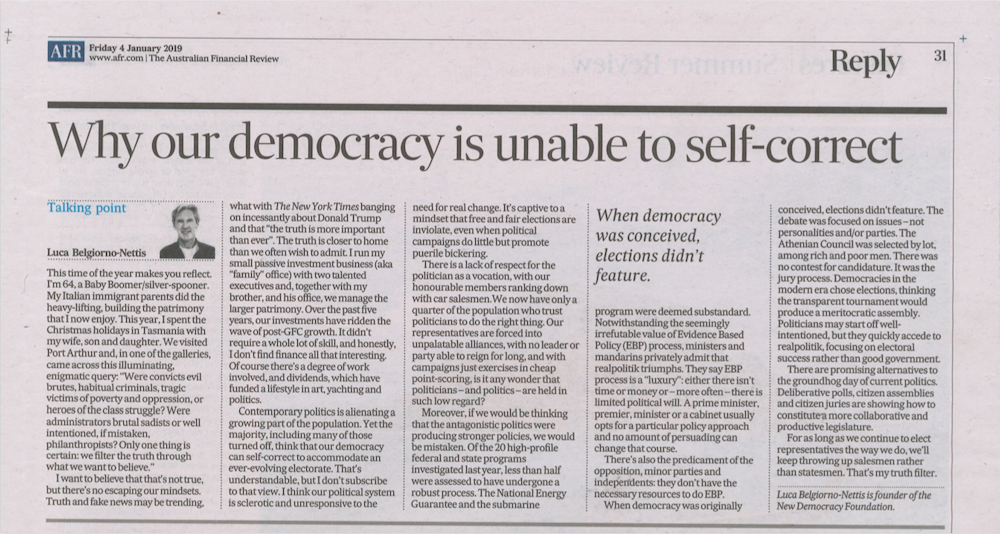 Luca Belgiorno-Nettis is founder of the newDemocracy Foundation.