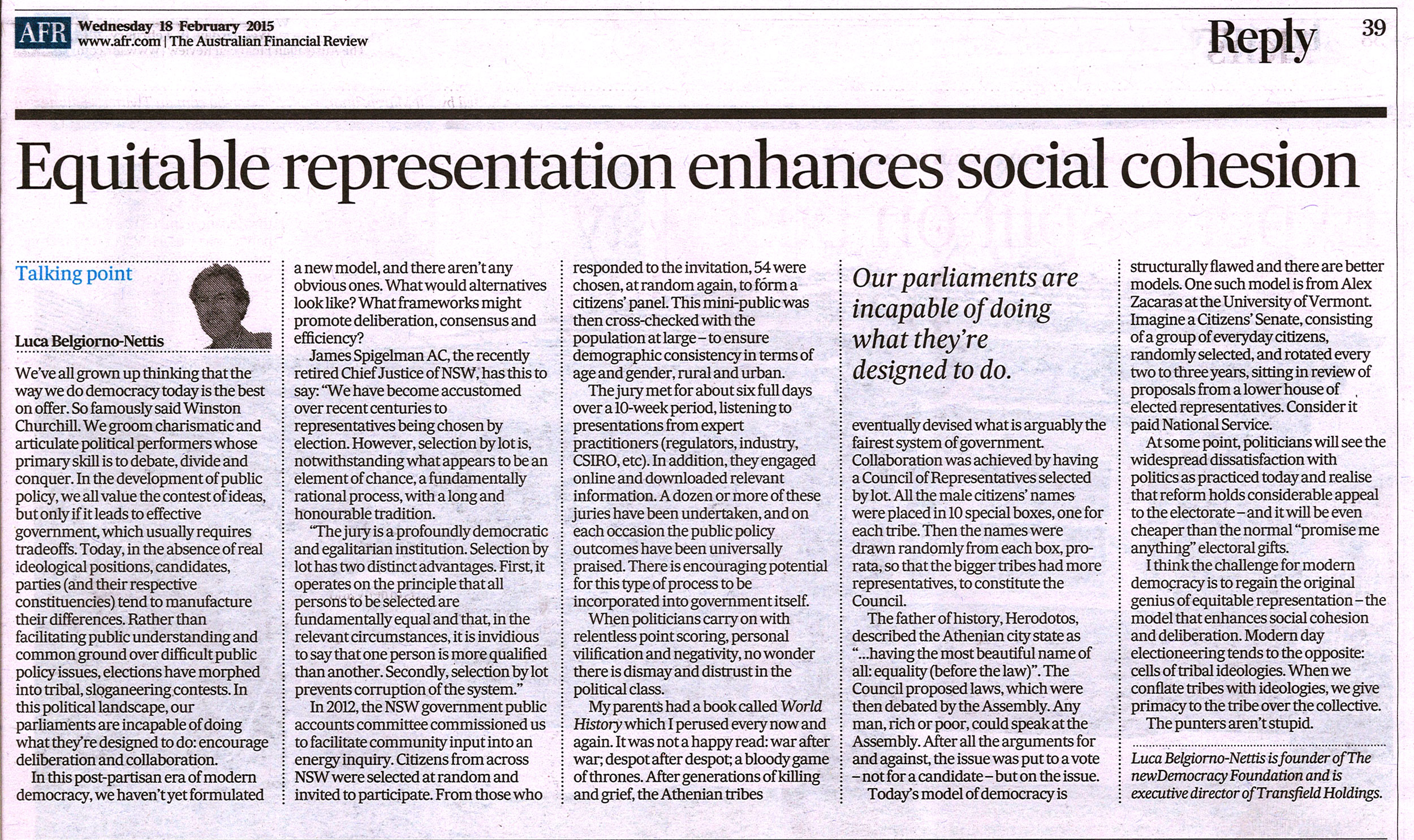 We’ve all grown up thinking that the way we do democracy today is the best on offer. So famously said Winston Churchill. We groom charismatic and articulate political performers, whose primary skill is to debate, divide and conquer. In the development of public policy, we all value the contest of ideas, but only if it leads to effective government, which usually requires tradeoffs.

Today, in the absence of real ideological positions, candidates, parties (and their respective constituencies) tend to manufacture their differences. Rather than facilitating public understanding and common ground over difficult public policy issues, elections have morphed into tribal, sloganeering contests. In this political landscape, our parliaments are incapable of doing what they’re designed to do: encourage deliberation and collaboration.

In this post-partisan era of modern democracy, we haven’t yet formulated a new model, and there aren’t any obvious ones. What would alternatives look like? What frameworks might promote deliberation, consensus and efficiency, whilst still satisfying political representation?

James Spigelman AC, the recently retired Chief Justice of NSW, has this to say about such an alternative institution:

“We have become accustomed over recent centuries to representatives being chosen by election. However, selection by lot is, notwithstanding what appears to be an element of chance, a fundamentally rational process, with a long and honourable tradition.

“The jury is a profoundly democratic and egalitarian institution. Selection by lot has two distinct advantages. First, it operates on the principle that all persons to be selected are fundamentally equal and that, in the relevant circumstances, it is invidious to say that one person is more qualified than another. Secondly, selection by lot prevents corruption of the system.”

In 2012, the NSW government public accounts committee commissioned us to facilitate community input into an energy Inquiry. Citizens from across NSW were selected at random and invited to participate. From those who responded to the invitation, 54 were chosen, at random again, to form a citizens’ panel. This mini-public was then cross-checked with the population at large – to ensure demographic consistency in terms of age and gender, rural and urban.

The jury met for about six full days over a ten week period, listening to presentations from expert practitioners (regulators, industry, CSIRO, etc). In addition, they engaged online and downloaded relevant information such as submissions and hearings. A dozen or more of these juries have been undertaken, and on each occasion the public policy outcomes have been universally praised. There is encouraging potential for this type of process to be incorporated into government itself.

When politicians carry on with relentless point scoring, personal vilification and negativity, no wonder there is dismay and distrust in the political class.

My parents had a book called World History which, I perused every now and again. It was not a happy read: war after war; despot after despot; a bloody game of thrones. After generations of killing and grief, the Athenian tribes eventually devised what is arguably the fairest system of government. Collaboration was achieved by having a Council of Representatives selected by lot. All the male citizens’ names (rich and poor) of the tribes were placed in 10 special boxes, one for each tribe. Then the names were drawn randomly from each box, pro-rata, so that the bigger tribes had more representatives, to constitute the Council.

The father of history, Herodotos, described the Athenian city state as “…having the most beautiful name of all: equality (before the law)”. The Council proposed laws, which were then debated by the Assembly. Any man, rich or poor, could speak at the Assembly. After all the arguments for and against, the issue was put to a vote – not for a candidate – but on the issue.

Today’s model of democracy is structurally flawed but there are better models. One such model is from Alex Zacaras at the University of Vermont. Imagine a Citizens’ Senate, consisting of a group of everyday citizens, randomly selected, and rotated every two to three years, sitting in review of proposals from a lower house of elected representatives. Consider it paid National Service. Imagine what sort of dynamic that would engender in our parliaments.

People may think changing democracy is all too hard – I hold a different view. At some point, politicians will see the widespread dissatisfaction with politics as practiced today and realise that reform holds considerable appeal to the electorate – and it will be even cheaper than the normal “promise me anything” electoral gifts.

I think the challenge for modern democracy is to regain the original genius of equitable representation – the model that enhances social cohesion and deliberation. Modern day electioneering tends to the opposite: cells of tribal ideologies. When we conflate tribes with ideologies, as we do today, we give primacy to the tribe over the collective. The punters aren’t stupid – it’s the system.